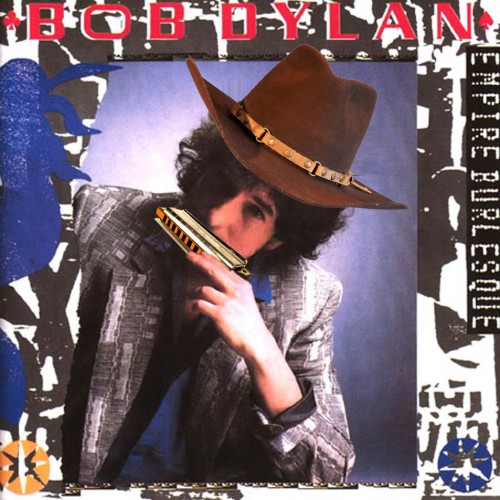 All the previous Full Albums selections we’ve done for Bob have been undisputed classics: Highway 61 Revisited, Blonde on Blonde, John Wesley Harding. Empire Burlesque is the opposite. Bob reportedly asked his producer to make him sound like Prince for this 1985 album. Now, his voice is as far from Prince as you can get, so they surrounded his rasp with drum machines, synthesizers, and chirpy backing vocals. Needless to say, it sounds nothing like Prince, and not a lot like Dylan. I’ve always defended this album, but if you can’t stand Men At Work or Culture Club, this may not be the album for you.

It does have good songwriting though, so I wanted to try to redeem it without the ’80s-production gloss. And I discovered one thing when researching covers of every track: a lot of them work really well as country songs. We posted the best covers we could find below, and many fit that mold.

The songs include the “cool” styles of country, sure: Americana, alternative-country, country-punk, etc. But there’s also some fine examples of polished pop-country sung by would-be Shania Twains and Garth Brookses. When he recorded Empire Burlesque, Dylan wanted it to sound contemporary. And he could have done it. But instead of looking to new wave, he should have looked to Nashville.

The Buckaroos – Tight Connection to My Heart

British folk guitarist John Martyn performed the most famous cover of this song not long after Dylan released the original, but it suffers from many of the same ’80s production impulses as Bob’s. It’s hardly a good showcase for Martyn’s brilliance, so instead we’ll go in the other direction with this light number from the Buckaroos. The French accent is charming, and fits with the acoustic-cafe vibe. Also worth seeking out: Jon Carroll and the Love Return’s piano-jazz version.

Zimming Point – Seeing the Real You at Last

It’s the rare tribute act that changes the songs, so props to Spain’s Zimming Point for making this their own. They lose the synthesized horns and wood blocks for a more straightforward folk-rock jam. The guitar solo halfway through is a high point. I wish they sang it normally rather than affecting a nasal Bob-voice (plus Spanish accent), but it is a tribute band, after all.

Helmed by famed Memphis producer Jim Dickinson, Amy LaVere’s second album propelled her to what counts for the big time in the Americana world: an Americana Music Award nomination and a duet with Lyle Lovett. A mix of covers and originals, it wraps with a tender country-soul “I’ll Remember You.” It’s one of the album’s most-covered songs (not that that’s saying much), and this is one of the best versions.

Here’s a case of cover coming out before the original. Textones’ lead singer had appeared in Bob’s video for “Sweetheart Like You,” so to thank her he gave her this then-unreleased song (didn’t he have the money to just pay her?). They keep the basic structure Bob would use, but give it a punkier edge, without the female backing chorus. Also noteworthy is a cover by Linda Gail Lewis (Jerry Lee’s sister), which is even more similar to the original.

Ron Sexsmith has been playing this one live for a decade now, but unfortunately, he’s never recorded it. The closest we get is a YouTube video, from which we pulled this audio. It’s a plaintive acoustic number that works for such a simple love song (though it also serves to emphasize the dumber lyrics).

Jonell Mosser has been a backing vocalist in Nashville for thirty years, singing on records for Rodney Crowell, Etta James, Wynona Judd, and many more. For one of her first albums out front, she covered “Trust Yourself” using a gospel-country hybrid that underscores the debt Dylan’s song owes to the Staples Singers classic “Respect Yourself.”

The O’Jays’ version of this song is a classic, but we’ve posted it a number of times here, so we’ll keep the country theme going with this tender Jimmy LaFave number. LaFave is known as one of the founders of the “Red Dirt” music scene around Oklahoma and Texas, which is an amorphous collection defined more by geography than genre. The scene is more alt-country than anything else I suppose, but this cover has nothing “alt” about it. It’s a Nashville weeper that you could see Garth Brooks putting near the end of an album.

Lucius – When the Night Comes Falling from the Sky

Last year, Bob’s ’80s reputation was somewhat redeemed by a hip tribute album called, simply enough, Bob Dylan in the 80s: Volume One. It spanned the gamut – a few Christian numbers, a Traveling Wilburys number, a few outtakes, etc. One clear highlight is Lucius’s take on Empire Burlesque‘s single “When the Night Comes Falling From the Sky.” Dylan fans will often direct you to the Bootleg Series outtake of this song as the better version, as if a rock combo should by definition be taken more serious than synthesized dance music. But I appreciate that Lucius appears to take their cues from the original, bringing the same energy and enthusiasm.

This one took weeks to track down. One of the least-covered songs on one of Bob’s least-covered albums, “Something’s Burning Baby” mostly existed as performed by tribute bands, with one exception: A Toronto band that earned brief local fame in the ’90s. Other than the album’s Discogs page, not many references exist online. It appeared that their candle burned brightly, then quickly faded. Eventually I messaged a guy who’d mentioned the song on a Pogues forum six years ago. He turned out to be a Toronto expat and big Scott B. fan from back in the day, who kindly got a buddy to rip the CD and send it our way (thanks Giles!). Thankfully, it was worth the effort, one of the best covers of the set. Scott B. Sympathy has the ’90s alt-rock vibe, but not at the exclusion of the big rock sounds of the ’80s. Unlike so many of their peers, they are not afraid to go big, bold and loud, with pounding drums and an epic guitar solo. Happy we can be the first place to post this online, as it was worth the digital crate-digging.

Perhaps because it’s the one Empire Burlesque song not given an ’80s production sheen originally, “Dark Eyes” is the one song on the album that musicians have deemed it acceptable to cover. When Patti Smith came out of retirement to tour with Bob in ’95, she even picked this as the one song she wanted to sing with him. She’s done it a few times since as well, which is always great, but we went with a couple younger artists for this: Iron & Wine and Calexico, who gave it a Middle Eastern feel for the I’m Not There movie soundtrack.

Pick up the original Empire Burlesque on Amazon. It’s not as bad as people say!