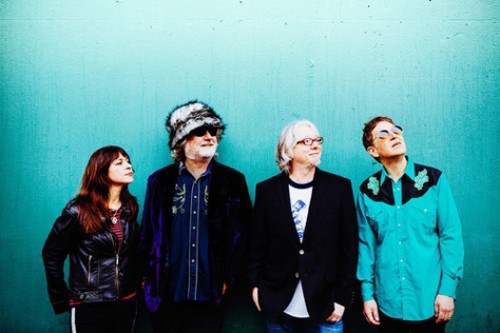 Whenever a former R.E.M. member plays a gig in Athens, Georgia, there is unspoken anticipation that, perhaps, there will be some sort of R.E.M. reunion. With The Baseball Project, which includes Peter Buck and Mike Mills, scheduled to close the 2015 edition of Athfest, an annual festival that benefits music education, how can local residents not dream of seeing all four guys together onstage?

Though The Baseball Project has been touring as a Buck-less quartet lately, many assumed he would be there for the show in his former hometown. To add grist to the rumor mill, a semi-incognito Bill Berry added guitar and whistling during part of the preceding set by We Love Tractor, a revamped version of Athens band Love Tractor.

As The Baseball Project – without Buck – began their set of guitar-driven, baseball-inspired songs, Michael Stipe could be seen in the crowd, stage left. When it was time for the second encore song, Mike Mills announced, “It feels like 1980 – we have to do this.” He coaxed a reluctant Bill Berry on stage. Drummer Linda Pitmon offered her sticks and seat to Berry, but he refused. Tambourine in hand, Berry played and sang along for “(Don’t Go Back To) Rockville,” with Mills taking lead vocals. It was a fun way to end a jubilant set, but not all that some had hoped for.

Though the camera wanders, the audio on the video below is of good quality. The music – more uptempo and less twangy than the original record – starts about one minute in.

Brush up on The Baseball Project’s box scores and statistics at their website.