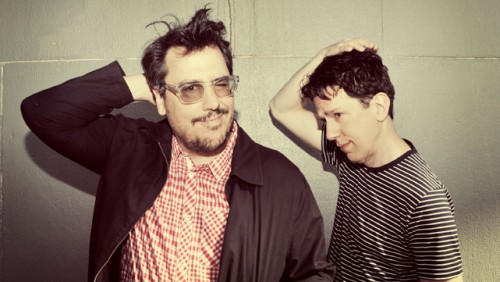 Yes, the two Johns know their stuff – and it shouldn’t be surprising that they know their cover songs as well. One of their signature songs is “Istanbul (Not Constantinople),” and it’s a good bet many of their fans don’t know that the Four Lads sang it first, in 1953. They’re not half bad on a few others, too…

“I Was Dancing in the Lesbian Bar,” Jonathan Richman’s ode to uninhibited shakin’ it, gets an update from John and John, who go back to their drum-machine roots and oompah sound. As a result, it’s a little stiffer than the original, but the sense of fun survives unscathed.

They Might Be Giants – Jessica (The Allman Brothers Band cover)

One of the longest instrumentals you can hear on rock radio on a regular basis, “Jessica” is a freewheeling tune that captures the joyous bounce of Dickey Betts’ infant daughter, for whom the song is named. TMBG slow it down and cut out a good five minutes of it – no southern jammers, they – but again, they get it across that this is music to smile by.

They Might Be Giants – Savoy Truffle (The Beatles cover)

From 2003’s Songs from the Material World: A Tribute to George Harrison comes “Savoy Truffle,” the Johns’ take on George’s side-four song from the White Album. It’s a respectful tribute to the recently deceased Beatle – well, it’s at least as respectful as a song about chocolate treats can be.

They Might Be Giants – Caroline, No (The Beach Boys cover)

Brian Wilson once called “Caroline, No” “the prettiest ballad I’ve ever sung.” That might be the case for They Might Be Giants as well. Certainly they keep both the beauty and the sadness of the song to the fore, not even trying to disguise either one from the listener.

They Might Be Giants – Starry Eyes (The Records cover)

The Records are an underrated power-pop band from the ’70s who are properly rated in one respect – their “Starry Eyes” single is justifiably named one of the best in the genre. The TMBG cover is very faithful to the original, keeping both the upbeat melody and the bitter lyrics about musicians getting screwed over by their manager. (Unlike Too Much Joy, who altered the lyrics to tell their own story on their own wonderful cover.)