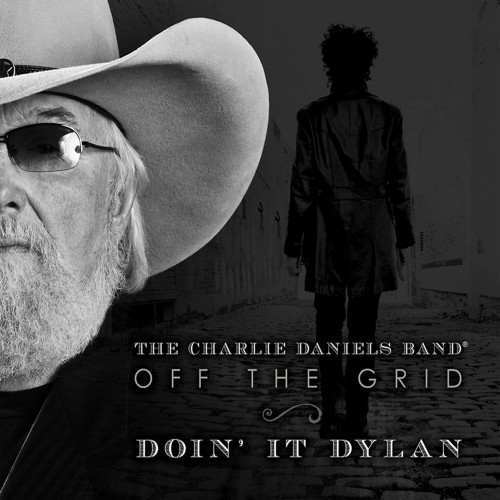 Bob Dylan has been referred to as “the most important figure in pop-culture history,” and as such his songs hold a special place. It’s become de rigueur for artists to cover Dylan tunes, even full albums, and they’ve done so with varying degrees of success. Pop culture writer Kelsey McKinney once explained that “a good cover takes a song and transforms it to fit the new artist”; if that’s the case, then 2014’s Off the Grid – Doin’ It Dylan by the Charlie Daniels Band is one of the greatest Bob Dylan cover albums out there.

It makes complete sense that Charlie Daniels would do justice to the American Folk genre. Daniels is a living legend of Americana. He is one of the finest fiddle players ever to take up the task. He is at his core a storyteller. And he is a self-proclaimed fan of “honest music.” Sam Cooke once said that after Dylan it won’t be about how pretty a voice is, but about believing that the voice is telling the truth. Perhaps that’s why Daniels’ down-home fiddle and iconic voice can reform and reimagine Dylan’s songs so well. Another voice of truth, another “pilgrim” who understands the soul of America in a way only few artists truly can. One more storyteller doing what he does best.

This retooling of (mostly) Dylan standards might have been just another cover album if they shared the exact same enthused positivism throughout. But each song on Off the Grid has its own unique feel, and with that, a truer sense of appreciation is felt, particularly in tracks like “The Times They Are A-Changin’,” “I Shall Be Released,” and “A Hard Rain’s Gonna Fall.” These tracks convey the genuine care Daniels is taking on Dylan’s behalf, and a respect that brings forth a line of trust between listener and musician.

In the end, each track on Off the Grid is less a Dylan tribute than a Daniels cover. For, as sung by an artist that lived through Dylan’s career and has spent decades preaching cultural tales across the country, these tracks are ultimately about what Bob Dylan’s music has been for Charlie Daniels.

MP3: The Charlie Daniels Band – Tangled Up in Blue (Bob Dylan cover)
Off the Grid begins with “Tangled Up in Blue,” and right from the start, Daniels distinguishes his cover as a whole new way of taking on Dylan. He calls it “one of my very favorite Bob Dylan tunes,” and his decision to take it in a new direction does not disappoint. Daniels explores the complexity of this Cubist-inspired work, taking a few liberties along the way. This high-energy cover reaches its climax when Daniels cuts the story short; by leaving out the final three verses, he ultimately turns the song into a less contemplative experience. “Blue”‘s finish leaves the album’s listener set up to experience more of Dylan’s stories from a new perspective.

MP3: The Charlie Daniels Band – Country Pie (Bob Dylan cover)
It is no shock that a cover of Nashville Skyline‘s “Country Pie” is included on this album, considering Daniels played on the original, something he still considers a high point of his career. Of course, this may also explain why this cover is stylistically very close to the 1969 original. Daniels considers this classic tune to be his favorite contribution to Nashville Skyline, and the energy he brought to it then still shines through in this cover.

MP3: The Charlie Daniels Band – Quinn the Eskimo (The Mighty Quinn) (Bob Dylan cover)
While the version of “Quinn the Eskimo (The Mighty Quinn)” on 1970’s Self Portrait is akin to a bar-ballad, Dylan’s 1967 take (which finally appeared on The Bootleg Series Vol. 11) gives the impression of a deeper message, something altogether more foreboding. As to be expected from previous tracks, Daniels changes the song’s tone entirely, making it more akin to an anticipatory celebration. Despite this artistic difference, he admits that he cannot find much meaning in the song on a deeper level (“I don’t know if Bob knew what it meant or not”). In the original context, the mysterious nature of Bob Dylan’s poetry is explored through a number of takes, but here it’s the pure enjoyment of his music that’s indulged.

Charlie takes us through Off the Grid track by track here.

5 Responses to “Cover Classics: Off the Grid – Doin’ It Dylan by The Charlie Daniels Band”