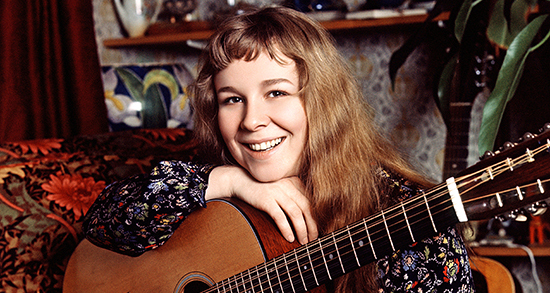 Indeed, who knows, it being all of 45 years since this song first graced any an ear. For many, their first encounter with “Who Knows Where the Time Goes?” happened thanks to the Judy Collins version; many others were introduced via the Fairport Convention version, which of course included Sandy Denny as lead vocalist. But she actually first recorded the song with her earlier group, the Strawbs. (I’m choosing to ignore the lyrical shift from morning sky to evening sky to purple sky.) Folk will vie with each other as to which is the true “original”, and Sandy is no longer, these thirty-odd years, able to adjudicate. I dare say there is even an as-yet-discovered demo knocking around, Sandy solo, but so much of her vault has been plundered that maybe I’m wrong. (And, of course, I am! And it is definitely purple!)

It’s fair to admit I am somewhat of a fan, both of Ms. Denny and of the whole folk-rock vibe, so maybe it’s no surprise that “Who Knows Where the Time Goes?” is the song I have the most cover versions of within my collection. But how many are good? For sure, many are faithful and earnest homages to the original; there are few in the genre who have not, at some time, given it a stab, and there are also many instances of her old band providing the backing for many a folkish songstrel, often performed live at the annual Fairport shindig, Cropredy. Sadly, possibly predictably, these are often copies, for to stray too far may be to upset the faithful. By and large I offer the opportunity to reappraise. Be my judge.

From a live recording, this has nonetheless become a staple on most of the Simone compilations available. Cut back to its skeletal core, the sparse vocal hovers around both tune and lyric, with nary a match to be dropped in the concert hall. Whilst not my favorite version, I don’t disagree that it is still one of the best.

OK, so Sinead is the secondary performer here, but as the chorus kicks in with her unmistakeable timbre, at once this cover belongs to her and her alone. The best living female vocalist covers the best no longer living.

I was originally going to include the latter-day Fairport reprise, but I felt it didn’t (quite) give quite the requisite pathos imbued by Richard Thompson, ever championing the cause for his late friend and bandmate. And this has pathos aplenty.

Chan Marshall really has a way with deconstruction, her covers generally being creatures of spare beauty, with little reminder of the original, yet oodles of quirky charm.

My favorite, no contest. The ache and pain of this version, by the then very aged Louvin; the lyric perfectly framing the frailly of his voice, totally belying the song being written by a teenage girl in London. Love it!

So, no room for such worthies as 10,000 Maniacs, Nanci Griffith, Kate Wolf, Kate Rusby, Susan Cowsill, Mary Black or Christine Collister, let alone many more, but you could do worse than source any or many of the above from Amazon, remembering other vendors exist also.

4 Responses to “Five Good Covers: Who Knows Where the Time Goes? (Sandy Denny)”