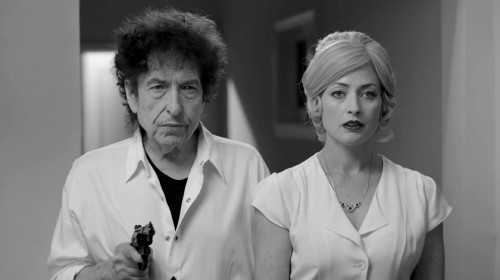 One thing that diehard Dylanologists and he-can’t-sing haters can usually agree about Bob Dylan: his music videos are mostly lousy. From his terrible lip-syncing in “Jokerman” to Scarlett Johansson portraying an Instagram filter in “When the Deal Goes Down,” there’s not a lot to love. More recently, though, he’s been on a hot streak (or at least a reasonably warm one). “Must Be Santa” was goofy, bewigged fun, and he amps up the kitsch even more in his new video for Frank Sinatra cover “The Night We Called It A Day.”

Heavy on the noir, the video pulls violence and betrayal from a pulpy old movie, with a Sin City-esq amplifying of the imagery and the drama. No spoilers, but if you recognize Bob’s counterpart here, it’s the Bond villain from License to Kill, Robert Davi. And the choice of Davi has an added wink: he recently released his own album of Sinatra covers. Watch below.

Dylan’s Sinatra tribute album ‘Shadows in the Night’ is out now.