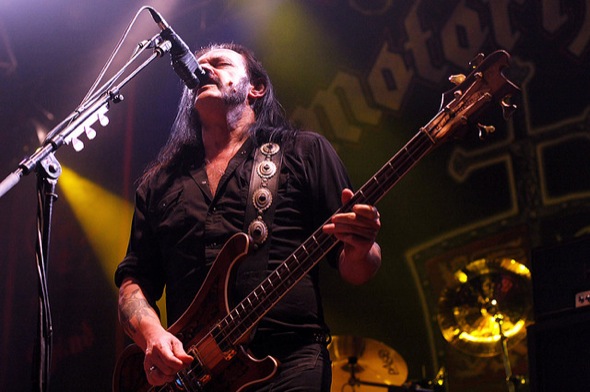 Lemmy has admitted to being more of a slot machine man than a poker one, but the Motorhead bassist knew which topic would make a better lyric (“when it comes to that sort of thing… you can’t really sing about spinning fruit”). “Ace of Spades,” his paean to gambling that sure sounds like it’s about more than your typical deck of cards, is his band’s signature work and the proto-speed metal song. Anyone can perform it and sound dynamic – even a bunch of plastic dolls.

We’ve presented a number of “Ace of Spades” covers before (my favorite of these: Union Avenue’s Cashified version), but that never stopped us from presenting more and it won’t stop us today.

More than a quarter century after Motorhead performed “Ace of Spades” on The Young Ones, Adrian Edmondson, a.k.a. Vyvyan, got his chance to perform it with the Bad Shepherds, who you may remember us rhapsodizing about earlier this month. We’re happy to take one more chance to share the fun of their changing a song from lunging to lilting.

“ieatpants is a little boy trapped in the body of a grown ass physicist.” That’s from the Bandcamp page of a man who records in a bedroom studio in Brooklyn. His cover of “Ace of Spades” is acoustic, more a lament than an anthem – but then, there’s only one letter’s difference between “lament” and “anthem” anyway. It’s from his 2013 album, somewhere between charming and unlistenable (not a critique – that’s the title); learn more about him on his web page.

Colin Devlin, leader of Dublin, Ireland’s very own the Devlins, recorded a cover of “Ace of Spades” at the suggestion of a friend of his. Would that we could all have friends like this, encouraging us to create art like this.

Elena Siegman’s here to give “Ace of Spades” a little bit country. Hard to believe, but there’s no Nashville to be found here; she’s an LA native who came to Boston to rock out. This cover comes from her 2011 solo EP The Mighty.

She Goes Bang’s cover of “Ace of Spades” deserves to be discovered like no other’s. The song slinks, but doesn’t leave its coiled tension behind at all. Just imagine this scoring a stealthy tracking scene in a Tarantino flick. It shouldn’t be that hard to imagine.

The snake eye’s watching you track down the Motorhead classic on iTunes and Amazon.