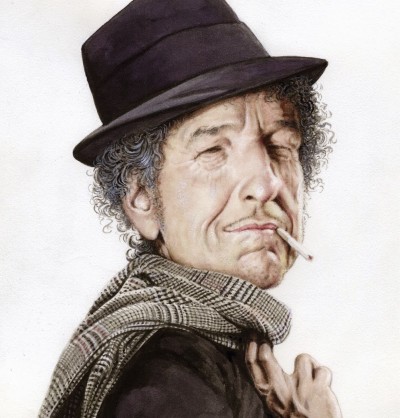 Tomorrow Bob Dylan releases his album of Frank Sinatra covers, Shadows in the Night. He’s long spoken of his appreciation for Sinatra. In his memoir Chronicles, Vol. 1, he talks about discovering one particular song in the early ’60s: “I used to play the phenomenal ‘Ebb Tide’ by Frank Sinatra a lot and it had never failed to fill me with awe. The lyrics were so mystifying and stupendous. When Frank sang that song, I could hear everything in his voice—death, God and the universe, everything.”

He’s invoked Sinatra in various other ways over the years too. Most notably, in 1995 he performed at Sinatra’s 80th birthday celebration. Instead of covering Sinatra like everyone else though, Dylan performed his own “Restless Farewell” (reportedly at Frank’s request). More recently, lines from Sinatra songs have begun popping up in his own songs – “Sugar Baby” includes a line from “That Lonesome Road” and “Cry a While” borrows heavily from “I Cried For You.” And on his SiriusXM show Theme Time Radio Hour, Dylan played seven Sinatra tracks, making Ol’ Blue Eyes one of the most-played musicians.

Until now, though, covers of songs Sinatra once sang have been relatively rare. Excluding the oft-sung standards on Christmas album, Dylan has only sung a handful of Sinatra songs over the decades. Eight to be exact, one of which he reprises on the new album. We dug up recordings of them all.

Dylan only performed this once, as a special birthday request for his dresser (yes, Bob had a dresser) Suzy Pullen that he then followed up with “Happy Birthday.” It’s ragged but heartfelt, and could have been something special given a few more performances. Sinatra had recorded this song twice, first as a 1958 single, and then again on his hit 1969 album My Way.

In his famous pan of Dylan’s 1970 album Self Portrait, Greil Marcus singles out his cover of “Blue Moon” for particular wrath: “We take ‘Blue Moon’ as a joke, a stylized apotheosis of corn, or as further musical evidence of Dylan’s retreat from the pop scene.” This version is an unreleased outtake, though other than the false start it doesn’t differ dramatically from the album version. Sinatra had covered it eight years earlier on 1962’s Sinatra’s Swingin’ Session, but it wasn’t released as a single and didn’t make much of a dent.

Dylan performed this song four times in the late ’80s as an acoustic ballad accompanied by guitar G.E. Smith. It’s unlikely Dylan had heard Sinatra’s. Though Sinatra sung this song on popular radio broadcasts in the ’40s and ’50s, he never put it on an official album. His version was eventually given official release on two Columbia compilations in 1994: The Golden Days of Radio and My Shining Hour.

Dylan only performed this song once, and it’s easy to see why. Though Dylan sings with passion, the thudding grunge-jazz arrangement does it no favors. Sinatra had covered it on 1964’s clumsily-titled Sinatra Sings Days of Wine and Roses, Moon River, and Other Academy Award Winners only two years after it won the Oscar for Audrey Hepburn’s performance in Breakfast at Tiffany’s.

Dylan closes his new album with this song, and it is obviously a longtime favorite. He’s played it live more than any other on this list – 28 times in total – most regularly on the 1986 tour with Tom Petty, but also in ’91, ’92, ’95, and ’00. Because they’re pretty different, I included two versions: a gaudy ’86 version with Petty and the Heartbreakers and a backing chorus and a more restrained acoustic version from 2000. Frankie Laine had a #1 hit with this song in August 1949, and Sinatra’s version arrived hot on its heels two months later. Fans evidently weren’t quite sick of the song; it hit #16.

Bob Dylan – This Was My Love (Infidels outtake)

In the studio recording 1984’s Infidels, Bob Dylan recorded all sorts of one-time-only covers, likely to get the band warmed up. This take sounds polished, but he never released it or performed it again. Sinatra released it as the b-side to 1959 single “Nice ‘N’ Easy.” Eight years later he re-recorded it, changing the title for whatever reason to “This Is My Love.”

Dylan went through a bit of a “We Three” kick in the ’80s. He first performed it at rehearsels for his 1984 Letterman appearance with LA punk band the Plugz, then twice in on the ’86 Tom Petty tour, then one more time in ’88. My favorite cover of the lot, this particular version comes from the ’86 tour and benefits from the glossy large-band arrangement. Sinatra had a #3 hit with it in 1940. Just a few months later, the Ink Spots took it to #1.

Last year Dylan covered the Beatles’ “Things We Said Today” for a Paul McCartney tribute album, but he’s been a Macca fan for decades. His first recorded cover is this unreleased outtake from a 1970 jam session with none other than George Harrison. “Yesterday” is the most covered song of all time, so no surprise Frank took a swing at it at one point. It benefited from being on the 1969 album My Way, which featured the smash hit of the same name.

Preorder ‘Shadows in the Night’ at Amazon. The illustration up top is by Drew Friedman, who is selling prints of it.