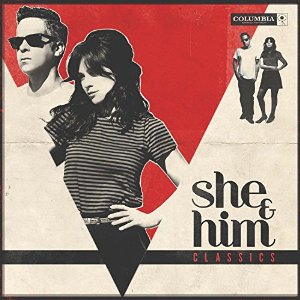 For the most part, that’s okay. She & Him is a band that sounds like they belong from another era, so you have to come to their albums with expectations about the song. While it might have been more interesting to hear newer songs performed in the style of older hits, what they give us is still charming in its own right.

For a lot of the run time, Classics acts as an interesting look at influence. The songs “Teach Me Tonight” and “Stay Awhile” (there are a lot of songs about pleading to lovers), if placed on a regular She & Him record, could be mistaken for an original composition in the same way that Smokey Robinson’s “You Really Got A Hold On Me” fit seamlessly into the band’s first record.

“She” is a soft café appropriate tune that features the vocals of M. Ward, the Him of the band’s name. Ward’s vocals have never been his appeal (even on his solo work, with songs written to suit his singing style), so the song never really takes off. It doesn’t help that if you’re looking for a good cover of “She,” you can do a lot better with Elvis Costello’s version from the Notting Hill soundtrack.

She & Him have always leaned toward the mellow side of the indie rock spectrum, so the songs on Classics (none of them too hardcore to begin with) are mostly taken down a notch in intensity. This can be lovely, but a few tunes lose something in the process. “Oh No, Not My Baby,” the King/Goffin written song best known for versions by Dusty Springfield and Cher, is about a girl who defends her man against her friends’ claims of infidelity. Through Deschanel’s voice, the song’s rough refusal of belief turns into something lovelier, something stranger.

The best-known song might be “Unchained Melody,” and it also works as the album’s best adaptation. Using only an arpeggiated electric guitar and thick backing vocals, the result is a song where the power is actually intensified by the sparseness. While a whole album of music done in this matter wouldn’t have worked, it’s a nice look into the parts of She & Him’s style that really set them apart from other acts. Classics isn’t perfect, but it’s charming, light, and effortlessly listenable. Which, going off of Deschanel’s work in the past, is exactly the way she wanted it.

Preview, buy, and download Classics at iTunes and Amazon.