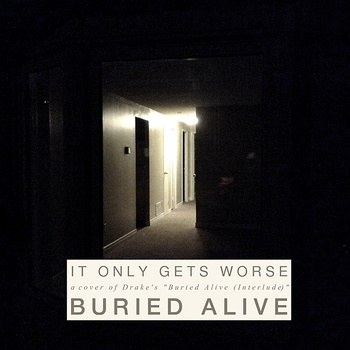 Despite what their name suggests, neither this track nor the musical duo itself points toward a waning musicality. With this cover of “Buried Alive”, originally by Canadian artist Drake, It Only Gets Worse manages to create a sublime, ambient piece that leaves the listener writhing in sweet ecstasy.

It Only Gets Worse is the collaboration between Matt Finney and Maurice de Jong – the latter, the brainchild of such projects as Gnaw Their Tongues, Aderlating and De Magia Veterum, and the former, the gloom behind the works of Heinali and Matt Finney, who we’ve been fans of for a while now.

The cover is indeed quite haunting and vaguely reminiscent of Nine Inch Nails, containing elements in the direction of post-rock and evoking strong sensations of angst through Finney’s spoken word dialogue in addition to de Jong’s ambient electronica backdrop. Not a cover you want to miss.

Listen to their other works here.