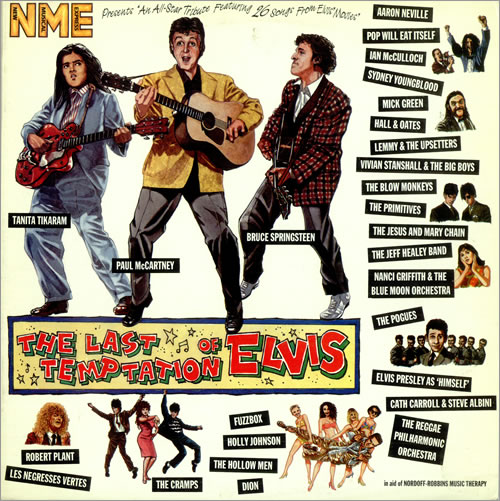 In 1990, the New Musical Express presented The Last Temptation of Elvis, a collection of covers from Elvis Presley movies designed to benefit the Nordoff-Robbins Music Therapy Centre in London. Executive producer and NME journalist Roy Carr landed some big names – Paul McCartney, Bruce Springsteen, and Robert Plant all showed up – and some even bigger tonal shifts. The album careens from rock to a capella to parody to metal and ends up with the King himself performing “King of the Whole Wide World.” “No performance implies any other,” Greil Marcus said about the album in his book Dead Elvis. “There’s no way to predict what anyone will have to say.”

Only that they’ll be singing an Elvis tune from the soundtracks to his movies, and that’s no guarantee of quality tunes – Viv Stanshall delights in covering the embarrassment that is “(There’s) No Room to Rhumba in a Sports Car.” This is a project that delights in refusing to take itself seriously – the liner notes include an essay “written” by Elvis, musing about why he didn’t wind up in “The Other Place, the real warm place”; they also ask its artists a bunch of silly questions, with the Pogues’ Shane McGowan easily providing the best answers. Q. Which one of Elvis’s physical or mental characteristics do you most envy? A. His dentist! Q. If you bumped into Elvis this very day, what would be your immediate reaction? A. “Buy us a Cadillac!” Q. Have you ever rhumba’d in the back of a sports car? A. No! but I’ve thrown up in a transit!

“The whole project is of course a dare,” Marcus states. “The singers daring Elvis, daring his most degraded, greatest-shit material to give something back; Elvis daring the singers to find life in songs where so often he only found humiliation.” There’s plenty of life and affection to be found in the results; try the following and see for yourself.

Tanita Tikaram may not have been the best known of the artists on Last Temptation, but her image was one of the most prominent on the album’s cover, right up there with Sir Paul and the Boss, and the liner notes pointed out that she bore a passing resemblance to the King himself – about as passing a resemblance as her smoky cover of “Loving You” has to the title track of Elvis’s first starring vehicle.

“Gee, Vince,” says a bathing beauty to Elvis in Jailhouse Rock, “when you sing it’s really gonesville.” He’d just finished performing “(You’re So Square) Baby I Don’t Care” for a vaguely interested crowd of poolgoers, and while it’s a treat to watch, it doesn’t have the kick that the Primitives gave it in their cover.

If you were to listen to “Wooden Heart” by Nanci Griffith, backed by the Blue Moon Orchestra, without any knowledge of its history, there’s no way you’d think it was an Elvis song. No way. You’d guess wrong a hundred times out of a hundred. That’s because she strips away the half-dopey cuteness of its G.I. Blues origins and gives its lilting melody the folky home it always deserved.

We’ve Got a Fuzzbox and We’re Gonna Use It belongs in the Band Name Hall of Fame, but it’s tough to fit on a marquee, so they were generally known as Fuzzbox. Their cover of “Trouble” is just as strong and definitive a statement of purpose as when Elvis fired it at Walter Matthau in King Creole.

Marcus singles out Aaron Neville’s live performance of “Young and Beautiful” as one of Last Temptation‘s highlights, calling it “so ethereal it’s scary” and claiming Neville’s directing his performance at the spirit of Presley himself. “You could have stayed young and beautiful forever, Neville seems to say, and I too, if only you’d never stopped singing as clearly as you sang this song – why didn’t you? Wrapped inside this fan’s devotion is the most gentle damning Elvis Presley will ever receive.”

The Last Temptation of Elvis is out of print, but you can score a used copy on Amazon, which also sells Dead Elvis.

3 Responses to “Cover Classics: ‘The Last Temptation of Elvis’”