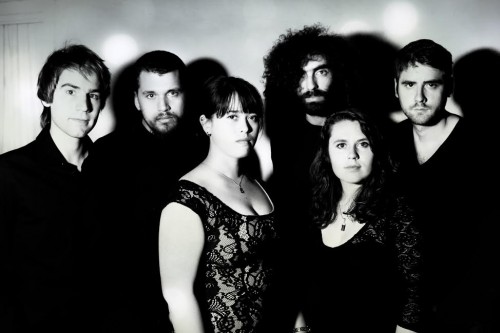 It’s no secret that we’re big fans of Bent Knee here at Cover Me. Their covers somehow manage to simultaneously be both nuanced and almost overwhelmingly powerful, and to work with their source material instead of feeling like they’re working on it. While their covers don’t come around as often as we’d like, they’re an absolute treat every time they do.

You may recognize their take on “You Are My Sunshine” from last year’s live performance of it, but today we’re proud to exclusively host the “Sunshine” MP3 – the band’s first studio release in over three years, off their new album Shiny Eyed Babies.

“We primarily chose to cover ‘Sunshine’ because we wanted to portray the lyrical content of the song in a more accurate light,” violinist Chris Baum tells us. “It’s a piece about desperation and heartbreak, but you don’t get any of that from the original, at least in a musical sense. I think it was Vince [Welch, the band’s producer and sound designer] who pointed out the contradiction between the poetry and the music, and we decided that the words and melody were worth exploring and presenting in an entirely different context.”

“Everyone knows the chorus of the song but hardly anyone knows the verses,” added Welch, “which give the song a completely different, much darker meaning.  We thought it’d be interesting to build an arrangement that showcases the darkness of the verses.”

Bent Knee has never shied away from extrapolating darkness from the songs they cover, and “Sunshine” artfully takes this to its furthest depths. Not only does the track starkly bring out the lyrics that so many listeners are cheerily unaware of, but it manages to take the song’s structure and turn it into one more tool in the band’s expansive repertoire. “The way ‘You Are My Sunshine’ flows is so gradual and has more verses than we’ve ever included in one song,” says bassist Jessica Kion, “and the lyrics become more defeated and depressed with every verse.”

This track gives us no choice but to hear the lyrics to “You Are My Sunshine,” and, when we do, it’s impossible to un-hear them. “Sunshine” isn’t the song that’s been sold to us, a song of light and picnics and dandelions; it’s a song of darkness, of despair, of the fear of losing everything. This is a world that the band thrives in, and Courtney Swain’s vocals flow seamlessly from one end of the spectrum to way past the outer limits of the other, just as the rest of the band seems to pluck each note and beat and stroke and strum from the entropy of the universe and turn the saccharine Frankenstein’s monster of the accepted standard into something difficult but unavoidable, something dark and human and inexplicably whole. “Sunshine,” for lack of a better word, is illuminating, and it isn’t to be missed. Enjoy.