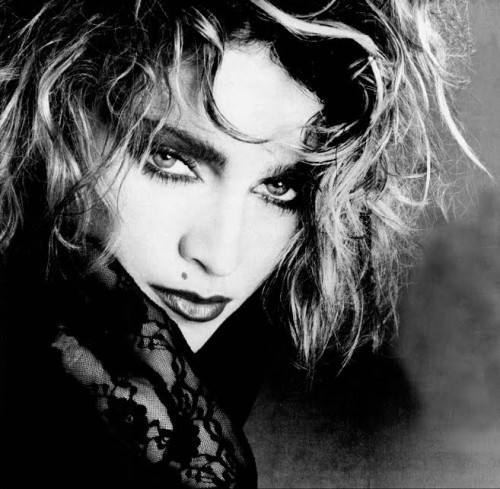 Forgive me, Father for I have sinned.

It has been….a really long time since my last confession. My sins are multitudinous (lust, blasphemy, coveting my neighbor’s ass… but in my defense, it’s a really nice ass), but the most egregious of all is idolatry.

I didn’t grow up Catholic, so I couldn’t seek solace in the open arms of Holy Mother Church. Instead, I sought solace from a leonine-eyed beauty who often incited the ire of the Catholic Church.

Madonna taught me lessons that have carried me through adolescence and well into adulthood.

Q. “Madonna, I’m dating this guy and he’s kinda an insensitive jag…”
A. “Then move on! Second-best is never enough. You’ll do much better, baby, on your own!”

Q. “Madonna, there’s this really mean girl at school and she’s basically an emotional terrorist. What can I say to shut her up?”
A. “I’m not your bitch. Don’t hang your shit on me.”

Q. “Madonna, you think I should buy this dress?”
A. “We are living in a material world and I am a material girl.”

Q. “Madonna, what’s the meaning of life?”
A. “Life is a mystery. Everyone must stand alone.”

Some lessons were more profound than others.

The story of Madonna is the story of fame. A wish fervently whispered by all doe-eyed ingénues before they go to bed – “God bless Mama… God bless Daddy… and God? Please please please let me end up with the kind of career longevity that Madonna’s had.” A girl with fire in her eyes and glitter in her veins sets out to rule the world… and does.

Born on August 16, 1958 in Bay City, Michigan, Madonna’s formative years were marred by the tragic loss of her mother to breast cancer. This loss had an indelible impact on the five-year-old child and formed the crux of her brazen personality. “I think the biggest reason I was able to express myself and not be intimidated was by not having a mother,” Madonna said years later. “For example, mothers teach you manners. And I absolutely did not learn any of those rules and regulations.”

Aged 19, with $35 to her name, Madonna arrived in New York City, where she slung donuts, worked as a back-up dancer, and started hanging out in the city’s vibrant club scene.

It was at the famed Dancerteria in the Flatiron District that Madonna caught the attention of DJ Mark Kamins. He took her demo tape to Sire Records and produced her first club hit, the ebullient “Everybody.” A few months later, Sire Records released her eponymous major label debut – an irresistible confection of sugary, synth-driven pop, the album featured the hits “Lucky Star,” “Holiday,” “Burning Up,” and “Borderline.” For her efforts, she was derided as a flash in the pan, her voice famously compared to “Minnie Mouse on helium.”

Madonna proved her critics thunderously wrong with the release of her sophomore effort; Like A Virgin went ten times platinum in 1984, eventually selling 21 million albums to become one of the best-selling records of all time. It also established Madonna’s place as a style icon. Flirting with the virgin/whore dichotomy, Madonna’s dark roots and blonde hair, wristful of jelly bracelets, and shredded lace wedding gowns inspired a legion of Madonnabes or Madonna Wannabes – young women (and men) so enamored with the singer’s thrift shop chic that they actually inspired Macy’s Department Store to open Madonnaland, a boutique selling bustiers and bracelets to both boys and boy toys.

The album also incited the ire of pearl-clutching parents when Madonna performed the title track at MTV’s Video Music Awards. Writhing around onstage in a torn wedding dress and gasping suggestively, her performance seems downright Puritanical in comparison to the twerking and grinding and the nude-colored bodysuits that adorn today’s VMAs.

Throughout her career, Madonna has been no stranger to controversy, and that VMA performance was just the beginning. In 1989, Madonna released Like A Prayer, her fourth studio album. In addition to dance-pop, it featured gospel and soul influences and strong thematic elements which drew from the singer’s Catholic upbringing.

The video for the nominative lead single deftly blended religious iconography and sexual imagery – a scantily-clad Madonna witnesses the murder of a young black woman by white supremacists. A black man is mistakenly accused of the crime and Madonna seeks refuge in a church, trying to find the strength to testify. These thematic elements weren’t incendiary in and of themselves, but specific details in the video – namely, Madonna kissing a black saint, dancing in a field of burning crucifixes and experiencing stigmata – were enough to ignite the fury of various religious organizations around the world, who called for a major boycott of Madonna’s tour sponsor, PepsiCo. The controversy ballooned to such an extent that even the Vatican got involved, condemning the video as blasphemous.

Rolling Stone, on the other hand, called Like A Prayer “as close to art as pop music gets.”

Banned by MTV, the video became the highest-selling video single of all time.

The latter half of the ’90s saw a much calmer and much less sexually-charged Madonna. She starred in Evita as Eva Peron and became pregnant with her first child. Following the birth of her daughter Lourdes, she discovered Eastern mysticism and the esoteric Jewish discipline of Kabbalah, all of which featured heavily on her seventh studio album, Ray of Light.

Following that album’s success, Madonna further diversified. She married English film director Guy Richie, she had a son, she starred in several movies, she wrote children’s books, she got divorced, she adopted a son, she performed at the Superbowl Half Time Show – and all the while, Madonna kept releasing albums, touring the world, and pissing people off.

It’s what she does best.

Well, that and serve as muse to the legion of women watching the throne and awaiting the crown of pop regency. Like Madonna, many of these women are known by a single name – Tiffany, Britney, Shakira, Beyonce, Rihanna, Gaga – but unlike Madonna, their careers have yet to stand the test of time. For the past thirty years, Madonna has been reinventing herself and the pop music wheel, dragging middle America into gay clubs and onto European dancefloors, exposing us all to things we never knew we craved. It’s no wonder that so many of L-U-V Madonna.

So, to the woman who’s been my personal consigliore since almost before I could walk – Madonna Louise Veronica Ciccone – Happy Birthday. And, as always, I need your advice.

Q. Madonna, what’ve you got for a thirtysomething with a penchant for pop music and gin cocktails?

You know what? Never mind. I think I got this.

A. “Express yourself so you can respect yourself.”

Her voice is squeakier and the slow sultriness of the track has been replaced with an insistent and fast-paced thump, but Rihanna does a pretty admirable job of living up to Madonna’s legacy. Voice be damned, Rihanna has something to say and she’s gonna make sure you hear it in this clubby version of a Madonna classic.

Haunting is a word that gets thrown around a lot when discussing Tori Amos, and this cover is no exception. An icy, crystalline version of Madonna aching 1998 ballad, “Frozen” is a sad song made so much more morose by Tori and her piano. Ethereal and slow, the lyrics sound more genuine when coming from this flame-haired faerie. When Tori sings, “If I lose you, my heart will be broken,” it’s less a statement and more a fatal promise. Madonna might sing pretty songs, but Tori turns them into flesh, blood and bone.

Italian indie rock band Hot Puppets Story take on this relatively new Madonna song and sex it up with a little bit of rock and roll. Is it possible to sex up Madonna even further? Yes. Yes, it is, and this Northern Italian quintet are just the boys to do it. Or, as Madonna’s shirt read in the “Papa Don’t Preach” video, “Italians do it better.”

A member of The Posies and Big Star, Auer knows pop music, and when he gets his hands on a sunny little gem like “Beautiful Stranger,” magic happens. Acoustic, muted and sweet, Auer’s version of this track from the Austin Powers soundtrack is a much dreamier of the song; in all honesty, I think this is a rare case where the cover far surpasses the original.

Armed with only an acoustic guitar and a passionate sincerity, Joseph Gordon-Levitt (yes, that one) owns this feminist anthem. Strumming loud and hard on his six string, he rasps and caterwauls the words as if he really means them. He is the big brother you never had giving you the advice you always wanted – “Long stem roses are the way to your heart but he needs to start with your head.”

If you’re going to see one all-male Madonna cover band in the Chicago area, it should be Mandonna. Unfortunately, you can’t buy tickets because they are fictional and featured on the cancelled ABC series Happy Endings, but in this clip you can watch Adam Pally (complete with facial mole) gyrate, preen and sing along to Madonna’s 1984 classic, “Like A Virgin” – a solid cover which he makes feel shiny and new with his low, husky growl. As Madonna said herself, it takes a real man to fill her shoes.

6 Responses to “They Say It’s Your Birthday: Madonna”