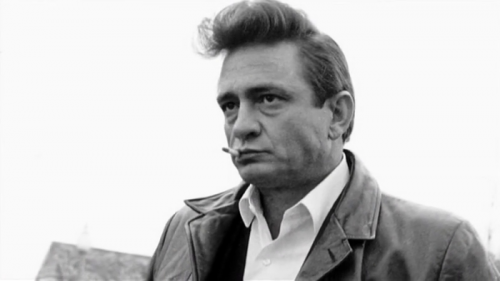 In honor of Johnny Cash‘s new posthumous release, “Out Among The Stars,” French filmmakers La Blogothéque put together a beautifully shot tribute to the late artist. Featuring Brandon Flowers of the Killers, Dawes, Father John Misty, and Local Natives, this short film captures the unifying and completely human spirit of Cash’s songs in a desert landscape.

Every musician talks about the influence Cash has made on them not only as artists, but as people. “He was also one the great storytellers,” says Flowers of Cash. “That’s something again that I gravitate towards.” Flowers then climbs out of the truck and with a little help from Dawes, performs a slow, country crooning rendition of “I Came To Believe.”

Following is Father John Misty with his take on “Baby Ride Easy,” which was originally recorded by Cash as a duet with June Carter. “You can hear them winking at each other, and it’s such an intimate thing you get to hear.” Again, Father John Misty’s take on the new song is stripped down and true to the roots of Cash.

As the sun sets, Local Natives takes a dark desert drive and covers the title track. The band transformed the tune into a synth-laden mood piece. Lit only by the headlights of a romanticized truck, the band’s harmonies echo throughout the empty desert.

The film, directed by  Arturo Perez Jr., is a nostalgic love letter to a pure, Americana essence. Watch the video below:

Go to Johnny Cash’s official website to purchase Out Among The Stars.

One Response to “Brandon Flowers, Dawes, Father John Misty, and Local Natives Go To The Desert For A Stunning Johnny Cash Tribute”