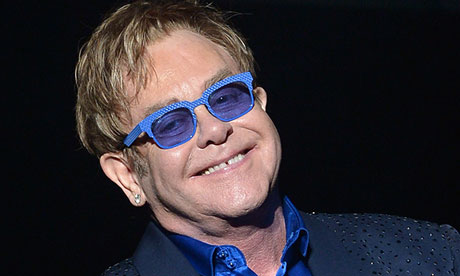 His parents named him Reginald Kenneth Dwight, and his dad wanted him to become a banker. But Sir Elton Hercules John, 67 years old today, had other ideas. Three hundred million albums, six Grammy Awards, one Academy Award, one Golden Globe, one Tony Award, the best-selling single of all time, a place in the Rock and Roll Hall of Fame, and a knighthood later, we say “happy birthday, Sir Elton.”

It may actually be impossible to fully appreciate Elton John’s impact on popular music. It’s not just the accolades above (which are only the tip of a massive iceberg of awards and honors). It’s not just the multiple soundtracks to Broadway shows and movies (like Disney’s The Lion King, the highest-grossing traditionally animated film in history). It’s not just that he released his thirty-first album last year to glowing reviews (with the Independent calling it “one of the best albums… of his career”).

It’s that Elton John’s music connects. Through his myriad personal problems – his closeted homosexuality, his eating disorder, his substance abuse, his anger issues, his suicide attempt, his flamboyant spending habits – John and perennial collaborator Bernie Taupin have made music that’s resonated across generations and genres. Look at an album or singles chart from any year between 1971 and 2000, and you’ll find Elton John’s name. Look at the concert histories of Queen, Billy Joel, Eminem, Guns ‘n Roses, Queens of the Stone Age, and Lady GaGa, and you’ll find a collaboration with Elton John. Hell, he once made a catchy song out of the words in the operating manual for Richard E. Grant’s oven.

So, on Sir Elton’s 67th birthday, it’s only fitting that we look at how some of his most enduring and timeless songs has been reimagined by artists across the musical spectrum. Happy birthday, Captain Fantastic.

Elton John’s melancholy lament of a failed relationship became one of his biggest hits, and was ranked by Bernie Taupin as being among his best collaborations with John. For the Two Rooms: Celebrating the Songs of Elton John & Bernie Taupin album, Sinéad O’Connor took the regret of the John original and made a haunting and ethereal cover from it. Her voice is just a fragile whisper against a delicately plucked harp, but increases in intensity as the song reaches its conclusion. “I gave my heart,” O’Connor croons at the denouement, adding her unique element to a song about the end of a relationship being “no sacrifice.”

Bernie Taupin called “Daniel” the “most misinterpreted” song he’d ever written with Elton John, but the song still became a massive worldwide hit. Wilson Phillips take the 1973 song and catapult it into pre-Nirvana 1991, with big reverb-y drums and a cheesy saxophone solo. The three women’s harmonies work very well together, but the earnestness of the original is lost with the glossy production and dated instrumentation.

Practically a medley of songs from the good old days of rock ‘n roll, “Crocodile Rock” fast became an Elton John favorite. Who better to cover it than the band Allmusic called “America’s first, best rock band”? The Beach Boys trade away the honky tonk piano and guitar chords for close vocal harmonies and classic doo-wop backing, bringing out the nostalgia of the original clear as a California day.

“Hard to record,” said Elton John of this atypical hard rock song. Atypical for him, maybe, but the blast of guitars and drums was perfectly suited for Flotsam and Jetsam. The Arizona thrash metal band knew how to celebrate Saturdays, and their cover of “Saturday Night’s Alright for Fighting” is a dirty and messy mix of ‘80s metal-esque sweat and booze. It’s not as clean as the Who’s take, and it won’t be played at football games like Nickelback’s, but there’s an authenticity here that is as evocative as Elton’s original. I mean, just look at this video.

What kind of birthday celebration would this be without this cover of “Rocket Man”? Ostensibly to show the the contrasting aspects of the astronaut in Bernie Taupin’s lyrics, the chroma-key masterpiece from the 1978 Science Fiction Film Awards was the real rocket man’s unmistakable acting and singing at his most indulgent. Shatner performed the cover anew in 2011 for his Seeking Major Tom album, but it’s nowhere near as delightfully surreal as his first take. (For more about/in defense of Shatner’s performance, click here.)

Check out more from Elton John at his website.

2 Responses to “They Say It’s Your Birthday: Sir Elton John”