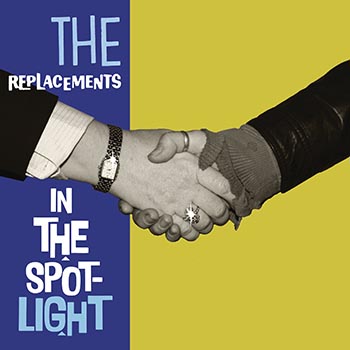 But if you took the bus to the bad part of town, watching the blight and the snowy misery go by through fogged up windows, you would eventually spot a burned-out, abandoned, and graffiti-tagged little red Corvette: perched up on blocks, stuffed with liquor bottles in the back seat, and harboring a coffee can in the front filled to the brim with cigarette butts. If you opened the door, you would find a floor littered with cassettes. K-Tel. Kiss. Big Star. And if you ran the VIN number, you’d find the owner to be the Replacements.

It’s hard to know why the ‘Mats weren’t successful. It’s also difficult to know why they weren’t a complete failure. One of the most influential bands to come out of the Generation X backlash against their parents’ music, the Replacements mimicked the dirtier side of ’70s rock and punk, then (d)evolved into a primitive complaint that life in America was not what Mom and Dad had promised us. The alienation from Ozzie and Harriet is captured completely in the line, “We are the sons of no one.”

When on point, lead singer Paul Westerberg poetically captured the slacker lifestyle, writing love letters on the back of losing lottery tickets and singing odes to Alex Chilton. When succumbing to the darker side of rock and roll, the Replacements were sloppily drunk and abrasive to their audiences, with Westerberg forgetting lyrics he had written (a problem that continues to this day). Lead guitarist Bob Stinson succumbed to his own self-abuse, getting fired by the band and self-destructing in the mid ’90s in another tragic sputtering-out of artistic energy.

Somehow, Westerberg kept everything together for a while longer, gaining fans, critical notice, and creating a legacy that inspired others to pick up a guitar. After some minor airplay and a few more albums, that rusted Corvette got towed away, and Westerberg trudged out on foot into a semi-succesful solo career, where everyone that went to his shows shouted out a request for ‘Mats songs. He didn’t look for that car again for 20 years.

Of course there were covers. The Replacements were well known for dropping their set list and replacing it with full shows of sloppy covers that are painful to listen to even now. When Bob Stinson’s replacement Replacement Slim Dunlap suffered a stroke in 2012, Westerberg and bassist Tommy Stinson recorded covers of Dunlap’s songs on limited release vinyl to raise money for his hospital bills. Since that beginning a couple of years ago, artists like Jeff Tweedy, Lucinda Williams and Steve Earle have contributed songs to that project, Songs For Slim, and it’s been a great success.

A good cover of a Replacements song is hard to pull off — it needs to balance melody, love, and lawlessness in just the right measures. Too rough and the tune is lost; too polished and the heart isn’t there. Below you’ll find a mixture of it all.

One of the best covers the ‘Mats ever did was for Stay Awake: Various Interpretations of Music from Vintage Disney Films, an odd covers tribute to the House of Mouse (Tom Waits singing “Heigh Ho” from Snow White, anyone?). Because the format of the original album was medleys, all the songs were sequenced together in a bizarre and almost completely random way. Yet the Replacements stand out strong, sounding like a burlesque bar band that goes wild when the strippers don’t show.

X — I Will Dare (Demo) (The Replacements cover)

Recorded during the sessions for Ain’t Life Grand, X’s cover may be the best of this particular bunch. The production values are crisp and the bass line vaults as John Doe rasps out the life that he’s adopted.

Deer Tick’s John MacCauley is an unabashed fan of covers and the Replacements both. In proper form, he dedicates “Bastards” to anyone drinking a beer, starts the song with a drunken howl, then finishes it with the “take it, it’s yours” mantra with fury and feedback.

Janovitz has been putting up free covers for years on his website. His take on “Regular” is everything it should be: a melancholy mixture of apathy and mild regret, where everyone is always one drink away from happiness.

Skyways are prevalent in Minnesota, where heavy snows and bitter cold combine to keep people indoors as long as possible. The Minneapolis Skyway System connects nearly 70 blocks with eight miles’ worth of them. Messersmith is a fellow Minnesotan who somehow is able to recreate a beautiful, devoted tribute to what some only see as connected corridors between buildings.

Recent Grammy winner and New Zealand teen sensation Lorde brings her own lampshade to “Swingin’ Party,” stripping down Westerberg’s ode to vulnerability even more than the original and adding a metronome-like beat to bear witness to a pulse. Lorde plays the song right down the middle, straddling the original double meaning to obfuscate whether it’s a song about a festivity or an execution.

Earle sets the gold standard for both recording a reverent cover and his own unique take on it. Gone are the Memphis Horns that the ‘Mats stole from the Box Tops, replaced with just an acoustic guitar, a mandolin, and a measured patience that belies the chorus of the song.

McCauley again, with the side project he did with the guys from Dawes and Delta Spirit. Originally an early version of Don’t Tell a Soul‘s “Talent Show,” “Portland” isn’t as brave (in fact, it’s kind of a glorified apology), but still holds up on its own.

Bonus Video: Joan Jett & Against Me — Androgynous (The Replacements cover)
Jett has been covering “Androgynous” for years, but another layer gets added when she duets with Against Me’s Laura Jane Grace (nee Tom Gabel), who came out as transgendered a few years ago and has struggled with the transition. What was originally a lonely piano is now a full-on rockin’ band, with an audience roaring their support; the song gains in strength, power, and celebration.

The Replacements continue to be on limited tour, and are on slate to perform at Coachella Festival and Shaky Knees.

4 Responses to “In the Spotlight: The Replacements”