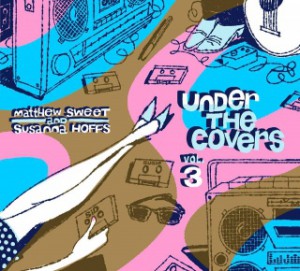 When Matthew Sweet and Susanna Hoffs recorded their first Under the Covers collaboration, they were surprised that it was released with the subtitle “Vol. 1.” Whatever genius at the Shout! Factory label chose to do that deserves a raise and a promotion, as it led Sweet and Hoffs to record two more volumes. Where Volume 1 consisted of songs based in the ’60s, and Volume 2 was made up of ’70s songs, Volume 3, released this week, is all about the ’80s, the decade when Hoffs came of age as a musician and Sweet wasn’t far behind.

The greatest joy about this series is that these releases are not so much cover albums as tribute albums. Both artists have deep connections to the music they’re covering, and in a child-is-father-to-man fashion, one can see the paths their careers took by the songs they come back to. The difference with Volume 3 is, now Sweet and Hoffs are interacting with their cover subjects. Hoffs’ band the Bangles made their first tour with the English Beat, whose “Save It For Later” gets covered here, and Sweet was one of the few thousand who purchased R.E.M.’s “Radio Free Europe” single when it was only available on the Hib-Tone label; he fell hard for the B-side, “Sitting Still,” which is the leadoff track on Volume 3.

As these are tributes, listeners shouldn’t come in looking for revelatory reworkings – there’s pleasure to be had from seeing just how closely Sweet and Hoffs can replicate the sound of the originals. The guitar twinkles in “Trouble” and rings in “Free Fallin'” in such a way that Lindsey Buckingham and Tom Petty would have to check their memories as to whether they were at that session or not. If Volume 3 were to be said to have a weakness, this would be it – there’s little sense of discovery for the listeners, who are likely as steeped in the material as Sweet and Hoffs are. But again, discovery isn’t the point here; this is an expression of appreciation for what’s come before, as well as happiness for those who can discover the past through these covers.

There is one difference in Volume 3‘s covers that doesn’t – can’t – happen in the originals, and that’s when Hoffs takes lead vocals in places where the original vocals were sung by men. “Girls Talk” and “More Than This” can’t help but have a different feel when it’s Hoffs delivering lines fired by jealousy and yearning, and it’s no coincidence that they mark the album’s highest points.

The songs Sweet and Hoffs have chosen to cover strike a nice balance between well-known songs, vaguely familiar favorites, and cult classics of what was then called “college radio.” Everyone knows “How Soon Is Now?”, sure, but not enough people can tell you much about “The Bulrushes” by the Bongos, and if one listener decides to find out more about them, then Sweet & Hoffs’s work is done here. People can nitpick about the song selection all they want – personally, I would LOVE to know what they would have done with the Three O’Clock’s “Jetfighter” – but you can’t deny they cut a far-reaching swath through the music of the day, from the cerebral Britpop of XTC to the indie-California sounds of Buckingham.

Incidentally, if you purchase the album through iTunes, the swath reaches just a little farther, as three bonus tracks are available on the iTunes-only deluxe edition – the Clash’s top 40 foray “Train In Vain (Stand By Me),” Marshall Crenshaw’s classic B-side “You’re My Favorite Waste of Time,” and Prince’s “I Would Die 4 U.” Just three more indications of how many styles of music found an audience in the ’80s, and what a wonderful job Sweet and Hoffs do in capturing the excitement and delight that these songs first brought to listeners three decades or more ago.

Under The Covers Vol. 3 is available on iTunes and Amazon; iTunes also has the deluxe version with three bonus tracks. For more about the album and the artists, check out these Popdose.com interviews with Hoffs and Sweet.