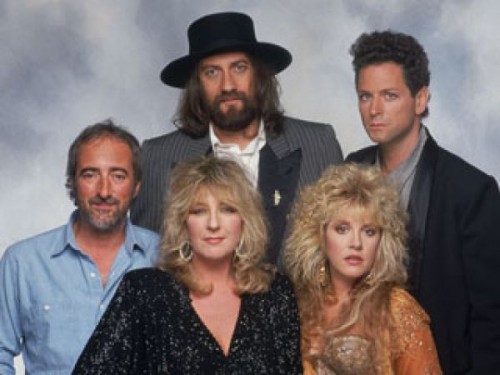 As the internet exploded over Lou Reed’s death, another piece of tragic news in the rock world managed to get under a lot of radar – most appropriate, as the news concerned John McVie, the lowest-key member of Fleetwood Mac. The band announced they were cancelling the Australia/New Zealand leg of their tour, as McVie was going to be treated for cancer. John, this one’s for you – stay strong and keep moving forward.

“Everywhere” was the fourth single from Fleetwood Mac’s Tango in the Night album, but it was no afterthought, going top-five in the UK, top 15 on the Billboard Hot 100, and all the way to number one on the adult contemporary charts. A quarter-century later, after being featured in a mobile phone commercial (can you think of a more natural pairing?), “Everywhere” reentered the UK charts and went to #15. If that’s not an indication of timelessness, I don’t know what is.

Actually, I do – the width and breadth of covers that have been recorded. “Everywhere” is no stranger to Cover Me – we featured the Midnight Faces cover just last month, and we’ve also showcased versions by Selebrities, Body Wash, and Land of Leland. Vampire Weekend also recorded a cover that got a lot of press. Despite this, it was no trouble finding five more covers worthy of bringing to the world’s attention…

Trevor Jackson is a perfectly good name for an up-and-coming musician, but in this case it’s a band name, made up of actor/musician Kyle Riabko and Boots Factor from Stephen Kellogg and the Sixers. They give “Everywhere” a little bit of country, a little bit of rock and roll, and a whole lot of indie gumption that adds up to a treat of a performance.

Lucy Wainwright Roche was a schoolteacher, but she just couldn’t get away from her singer/songwriter genes – when your family line connects to the Roches, the Wainwrights, and the McGarrigles, life in music is practically preordained. It’s fortunate (and not surprising) that Lucy is no pretender to the family throne; she showcases a very nice voice and guitar here in her cover of “Everywhere.”

The Salt Flats are an Irish band – Belfast-by-Tynemouth, to be specific – who had it in them to record an EP of four Fleetwood Mac songs, and then give it away on Bandcamp. Listen to a quarter of it here, then rush off and listen to the other three quarters. You’ll not be sorry.

Surprisingly, a number of “Everywhere” covers are reggae versions. Somehow, that tropical flat-tire beat is a natural fit for this song. Marcia Griffiths demonstrates that here, and exhibits a lovely voice to boot.

If there’s one genre that would seem more foreign to Fleetwood Mac than reggae, it would be house music. But thanks in no small part to the vocal work of Becky Jean Williams, “Everywhere” is perfectly at home here, and would prove a welcome addition to any strobe-lit dance floor.

“Everywhere” is available on iTunes and Amazon. Send John some positive thoughts via FleetwoodMac.net.