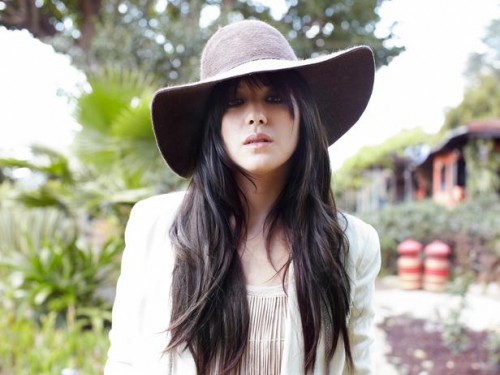 For a generation of teenage girls growing up in the early part of the 00s, Michelle Branch served as both counselor and inspirational figure. Her dulcet acoustic melodies salved many a broken heart and unlike the Britney-Christina-Jessica troika – she was not blonde, she wrote her own songs and she played her own instrument.

Born in Phoenix on July 2, 1983, Michelle Branch got her start in music early. Singing at the age of three and enrolling in voice lessons at the age of eight, she released her first independent album – Broken Bracelet – when she was just 15 years old.

Three years later, she released her major label debut, The Spirit Room – a smashing success certified double platinum by the RIAA which featured the hit singles “Everywhere,” “Goodbye To You” and “All You Wanted.”

Bolstered by the success of her debut and her sophomore effort, Hotel Paper (certified platinum and debuted at #2 on the Billboard charts), Branch has collaborated with several musicians from a variety of different genres. She worked with Chris Isaak on the duet “I Lose My Heart To You,” twice with Santana on “The Game of Love” and “I’m Feeling You” and most recently, with hip-hop icon Timbaland on the 2010 track “Getaway.”

In recent years, Michelle Branch has strayed from her pop-rock roots and ambled down a country path, forming The Wreckers with backup singer, Jessica Harp. The duo toured with Rascal Flatts and were nominated for a CMA award.

She’s also expanded in other regards – blogging on her official website under the heading ‘Musings From A Recovering Pop Star’ and co-hosting cooking lessons at CookTasteEat alongside chefs Michael Chiarello and Mary Sue Milliken.

However, the self-proclaimed backyard chicken farmer and baker never wanders too far from her love of music. Branch is currently working on her latest album, West Coast Time and continues to perform throughout the country.

During the early 00s, pop punk covers became de rigeur. Hell, Fearless Records released an entire album series based around this concept and that’s where we find this cover courtesy ofJacksonville, Fla. quintet Yellowcard. What saves it from being just another pogo-ing pop-punk song is the injection of a fiercely-played fiddle. It’s a little punk, a little pop and a little Charlie Daniels…but it works remarkably well.

Taylor Swift – All You Wanted

Michelle Branch helped lay the groundwork for Swift’s personal acoustic pop. In this live cover performed on the 2011 Speak Now tour, “All You Wanted” becomes a less a introspective bedroom rumination and more a crowd singalong.

Canadian singer-songwriter Noella Choi strips Spark down to its bare, acoustic bones and still manages to retain the weight of the whoa-oh power pop melodies of the original.

Temple University’s co-ed a cappella group harmonizing on Michelle Branch’s biggest hit. The kids from Glee wish they sounded this good without instruments.

Screamo and pop-rock aren’t exactly kissing cousins. Mostly because screamo could beat up pop-rock and steal its lunch money, but Jonny Havens masters the loud/soft dynamics of this cover. His throaty growls actually add to the song instead of obliterating it which, considering the original source material, is no small feat.

Want to (Michelle) Branch out a little more? Check out iTunes and Amazon.