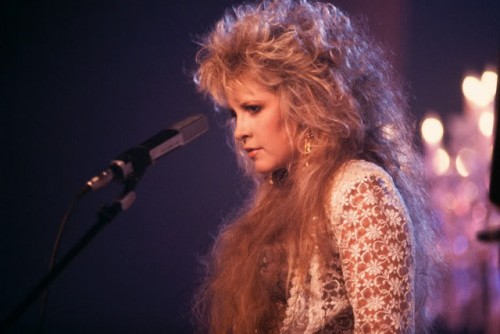 When you think of Stevie Nicks, you think of her as an artist whose songs are frequently covered, not one who does the covering. After all, why would someone who can write Fleetwood Mac classics like “Dreams” or “Rhiannon” and solo classics like “Stand Back” and “Edge of Seventeen” feel the need to play other people’s songs?

Of course, during the heady years of the late ’70s and early ’80s, there was no time for other people’s material, as Fleetwood Mac had three extraordinary songwriters in the band – Nicks, Lindsey Buckingham, and Christine McVie. Nicks generated so much high-quality material that she released a solo album, 1981’s Bella Donna, with songs that equaled her best work with the band. Her cocaine habit and subsequent addiction to Klonopin halted her songwriting for several years. She only resumed writing at the urging of her friend Tom Petty, but nowadays she leaves room in her repertoire for the work of other artists as well. Check out some of that work below.

Nicks may not, at first, seem like an artist influenced by country music, but her connection with the genre goes way, way back. Her grandfather, a frustrated country performer, taught her to sing duets with him when she was just 4 years old. Here she pays tribute to his influence with a version of this Johnny Cash classic. She gives the track a relaxed, Caribbean island lilt; at first it seems odd, but as the track develops you’ll find that it grows on you.

Recorded for (but ultimately left off of) 1985’s Rock a Little, this Warren Zevon cover eventually appeared on a 1998 box set.  You’ll find Zevon’s version on his 1987 album Sentimental Hygiene, but it’s Nicks who makes the song sound, well, sentimental. She sings in apology to her lover, asking to be taken taken back after doing wrong. This track is not the only connection between the two songwriters; Nicks sang backup vocals on Zevon’s 1976 eponymous major label debut.

Petty and Nicks aren’t just friends – they’ve also toured and recorded together, most notably on 1981’s top-five hit “Stop Draggin’ My Heart Around.” She tackled this Tom Petty track, which originally appeared on his first solo album Full Moon Fever, for the soundtrack to the TV show Party of Five (remember that one?). Her subtle, pared-down take on the song plays down its anthemic qualities, instead injecting a tinge of regret.

Soundstage was recorded in front of an intimate TV studio audience, but with “studio” sound and some later overdubs. Nicks released this Dave Matthews cover as the lead single from the album. Musically a fairly faithful version, Nicks, with her distinctive warble, still manages to make the song her own.

Most often seen as an ethereal Gypsy queen, Nicks recently showed that she still has a few tricks up the flowing sleeves of her stage gown. With the only new track on her 2007 compilation Crystal Visions, she reveals a different side to herself – balls-out rocker. This track doesn’t stray much from the original, but that’s okay. Nicks proves that she’s perfectly up to the challenge and can belt it out with the best of them.

One Response to “In the Spotlight: Stevie Nicks”