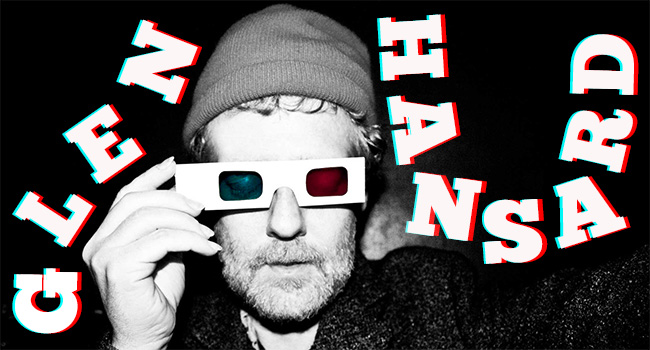 Neutral Milk Hotel. Townes Van Zandt. Britney Spears. Yes, Britney Spears. Glen Hansard has been covering other people’s songs for 30 years, from the street corner to the stage. His music career started early, stemming from a deal with his headmaster when he was 13: he could leave school and follow his musical heart;  if it didn’t work out in a year, he would be welcomed back with open arms. So off he busked.

After Hansard formed the Frames in 1990, his mother borrowed money for their first demo, which landed them on Island Records. However, after poor sales Hansard moved to New York City to pursue an acting career. After landing a role in The Commitments, he had the wherewithal to reject the instant success, as he realized playing a musician in a film was not as fulfilling as being one. So he went back to the Emerald Isle and gave the Frames a second chance.

They put out a number of albums over the next ten years, but Hansard started to get restless. “It was beginning to feel like a cul-de-sac,” he said about the band, and he formed a musical partnership with Marketa Irglová, whom he had known for years. They recorded an album under the name The Swell Season, and it was a new direction — musically and (eventually) romantically.

When a former member of the Frames asked them to contribute to an independent movie about an Irish busker, they jumped on it. The film, of course, was Once. They both ended up acting in it and writing all of the music, some of it coming from their last album.

In an interview with Pitchfork, Hansard said:

[I] couldn’t believe that this record I put out with Mar, that I was really proud of, only sold 300. Then six months or a year later it gets re-released as the Once record. Four days ago I just heard that it went gold over here. That’s half a million fucking records! That’s insane! That is fucking insane. And all we did was change the cover [laughs].

More than just the cover changed; the Swell Season went from playing for a handful of people to playing for thousands. Maybe it wasn’t measured in sold-out stadiums, and maybe it never would be, but success had found Glen Hansard, and with it came other problems. The ensuing success partly strained a deepening relationship he had with Irglová, and while their voices still entwined onstage, their hearts eventually went their separate ways.

Surprisingly, the Once story wasn’t over; a new chapter began when Broadway came calling. Hansard was reluctant to allow his creative child to be raised by someone else, but he relented, and as a stage musical it conquered the Tonys, with eleven nominations and eight awards. Hansard seemed to wish more goodwill on the production than take credit for it himself (“It’s theirs now,” he has said). Certainly the same could be said for his tributes below; he has transformed others’ songs by making them partly his own, and humbly reveres each artist unconditionally.

“We’re going to sing you a song by a resident of Eugene, Oregon,” Hansard begins, and after he tips his hand that it’s the Pixies, the rest is all things Hansard: a Finding Nemo reference to encourage the audience to be themselves, nailing the Pixies vibe with just an acoustic guitar and Irglová’s harmonies, and gushing about lead singer Frank Black at the end (“He’s the fucking king, man”).

Although we’ve featured this song, uh, last week, we think this may be the best version Hansard recorded of the song, from Late Night With Jimmy Fallon. Like a lot of late night show performances, it was then scrubbed from the internet and never officially released. It’s a shame that television networks showcase the best musical entertainment in the world, then put it in a lockbox never to see the light of day again.

Michelle Shocked may find herself in the midst of controversy for some homophobic comments she made a few months ago, but her album Short Sharp Shocked was once the darling of alternative folk (whatever the hell that is). “Fogtown” itself has not been covered often, and Hansard rips into it with his canines, chews up the words and spits them out with the rest of his teeth. His gentle mocking of the crowd for not following directions is priceless.

The Frames — Where is My Mind (live) (Pixies cover)

Cover Me is no stranger to “Where Is My Mind,” but that doesn’t mean there’s not a different cover hiding behind the rocks. Glen Hansard knows his Pixies, so he sings it with a Frank Black spastic abandon, yodeling when necessary. The violin carries the haunting chorus until Hansard encourages the audience to take over; the song ends cold with the trademark “STOP!” that begins the classic post-punk tune.

The Swell Season recorded a studio version of Dylan’s song for the I’m Not There soundtrack (Cate Blanchett as Bob Dylan, anyone?), but Hansard had been busking it for years. This take is from 2010, when the Swell Season played a few songs after the screening of Once in Chicago. Perhaps because Hansard had laryngitis, and Irglová was miked better, her harmonies come in good and strong for this performance of  “You Ain’t Going Nowhere.” Hansard makes a mistake at the end, using his trademark humor to prolong the joke into a longer laugh.

At a joint performance with both Irglová and the Frames, Hansard gives them all a break and tears into another song solo that he knows by heart. After a tremendous roar and some impressive speed folk playing on The Horse, his ancient Takamine acoustic guitar with a huge hole where the pick guard should be, he stops to implore the audience at the record store he is playing at to buy Van Morrison’s album. Good advice.

The Swell Season — Into the Mystic (Van Morrison cover)

Another song Hansard has done a zillion times, and although violinist Colm Mac Con Iomaire of the Frames/Swell Season is not adding to the mix here, the acoustic arrangement and the fact that it’s a studio recording allows Hansard to throw a good bit of nuance into the performance — as well as blow it out of the water when the opportunity presents itself.

In 2008, The Swell Season played in Milwaukee and invited the Whitefish Bay 8th grade choir, fans of the band, to perform with them. That’s when things went epically right, or tragically wrong, depending on how fragile you think a child’s mind is. After performing the requisite Oscar-winning song “Falling Slowly,” Hansard decides they are going to cover the Pixies’s “Gigantic.”

He introduces the song as “the dubious relationship between a white lady and a black man,” then starts playing the bass and singing Kim Deal’s off-color song about sharing a little afternoon delight with a guy with a rather large skyrocket in flight. The audience eats it up, laughing uncontrollably at every sexual innuendo. It’s ironic that when Hansard was the same age as the choir, he had already dropped out of school and was busking in the streets.

Perhaps the most unusual cover here, the Frames do an amazingly spot-on performance of Joy Division’s post-punk/goth dance hit. Mac Colm Iomaire’s violin wondefully mimics the synth tones from the start of the song, and Hansard pulls out a baritone from who-knows-where to nail Ian Curtis’ voice perfectly. In an instant, Hansard gets the Hibernian crowd singing the chorus, throws in a little punkish guitar noise, and his job is done.

You’re more than welcome to visit Glen Hansard’s official website, as well as the Swell Season’s.

2 Responses to “In the Spotlight: Glen Hansard”