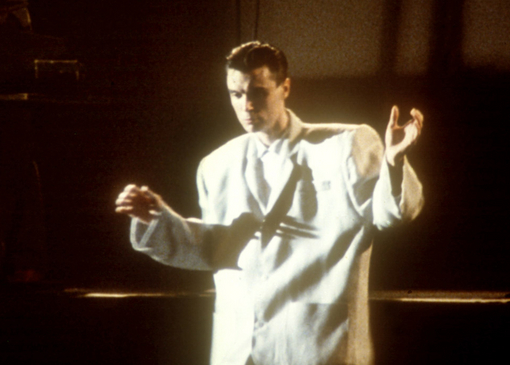 Like any self-respecting rock musician these days, David Byrne has a musical currently running in New York, Here Lies Love, a disco extravaganza about Ferdinand and Imelda Marcos, and today he will celebrate his 61st birthday basking in its excellent reviews and an extended run. Although Byrne will always be known for his work with Talking Heads, he has also released solo albums of wildly varied styles, written books, created visual art projects, directed films and written music for movies, television, ballet and opera (winning an Oscar for his work on The Last Emperor). He has collaborated with artists as diverse as Brian Eno, Fatboy Slim, St. Vincent, Twyla Tharp, Phillip Glass, Robert Wilson, Selena, and Thievery Corporation. Not to mention running a record label and an Internet radio station. Also, he has designed bicycle racks.

However, despite his prodigious output throughout the years, most covers of Byrne’s work are from his Talking Heads days. The band’s sound changed over time, and we offer these covers, in the order that the originals were released.

From Talking Heads: 77, their debut album, “Psycho Killer” was the song that put them on the map. It was unlike anything else on the radio at the time, and Byrne’s yelping vocals are odd and jumpy, as befits a killer, particularly a psycho one. The narrator jumps back and forth between first and second person, and memorably, English and French, as if his mind cannot settle anywhere. This version is in Polish and is fun, but it lacks the sense of foreboding of the original, and the French.

The original version of “Heaven” (from Talking Heads’ third album, Fear of Music) has almost a country feel to it — very different to the urban, angsty feel of most of the album. Twisting genres even more, this cover, by the English band Simply Red, turns it into a smoldering soul ballad.

Remain in Light was a game changer. Probably the first time that most rock fans heard of “polyrhythms,” the album took ideas that had been percolating in Talking Heads’ sound and brought them to fruition. An expanded band played complex songs with elements of rock, funk, soul, “world music,” ambient and electronic music, and probably other genres. Brilliantly conceived by the band and producer (and May birthday boy) Brian Eno, the album ultimately spawned Talking Heads’ most iconic songs (and music videos), “Once In A Lifetime.” But “The Great Curve,” is the most thrilling song on the album, leaving the listener breathless at the end. Phish, who for years would perform covers of whole albums during their Halloween shows, did Remain in Light in 1996 in Atlanta, augmented by horns, percussion and synthesizers. Their version of the album, performed live, is remarkable, as is this cover.

After the mind-blowing Remain in Light, the band released The Name of This Band is Talking Heads, an often overlooked live collection including performances from both the original and expanded lineups, before putting out Speaking in Tongues. It took the sound of its predecessor and opened it up a bit, with more traditional songs, including the band’s first Top Ten hit, “Burning Down The House.” “Slippery People” used elements of funk, soul and gospel music, and this cover is by the Staple Singers, a great band that helped to popularize a fusion of folk, rock, soul and gospel. The Staple Singers’ arrangement is not unlike the original, but with Mavis Staples singing, which is always a plus. A few years later, Pops Staples appeared in David Byrne’s directorial debut, True Stories, singing a song written by Byrne.

What cover collection would be complete without a bluegrass version? After Speaking in Tongues, the Talking Heads released one of the great rock movies, Stop Making Sense and its soundtrack, before returning to the studio for Little Creatures, which in many ways stripped out the groove and returned to a more straightforward rock approach. It was kind of a grown-up album and is probably the band’s most accessible, from start to finish. This laid back version, from a live performance last summer in New York by Michigan band Greensky Bluegrass, works because even though the song is bleak, the music is not.

There is a clear mutual admiration between Byrne and last month’s birthday boy, Richard Thompson. Byrne contributed to a Thompson tribute album, and the two performed together in 1992, playing separately and together, on their own songs, and covers. This cover is from a Byrne solo performance later in 1992 in San Francisco.

Listen to David Byrne-ing down the house on iTunes and Amazon.

One Response to “They Say It’s Your Birthday: David Byrne”