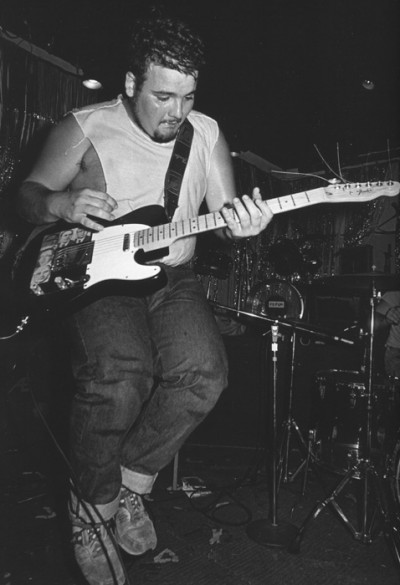 D. Boon was the energetic front man and guitarist for the highly influential Southern California punk band The Minutemen. If you watch videos of any of the Minutemen’s live shows, you’ll immediately notice the amount of energy that D. Boon exhibits as he bounces around the stage while belting out his politically infused lyrics. His funk- and blues-inspired guitar playing really opened up boundaries in an era of punk rock that was focused on two- and three-chord progressions. Unfortunately, he passed away at the too-young age of 27 in a tragic automobile accident, and the Minutemen called it quits immediately afterward.

This April 1st would have been Boon’s 55th birthday, and his music resonates today as strongly as it ever did. It’s no accident that when Neutral Milk Hotel’s Jeff Magnum performed at Occupy Wall Street, his protest cover song of choice was no Dylan epic, but an affecting and most empathic version of the Minutemen’s “Themselves.” We’re celebrating Boon’s memory by taking a look at some bands that have covered the Minutemen, as well as some songs that the Minutemen themselves chose to cover.

While “Corona” will be instantly recognizable to a generation of MTV-watching Knoxvillagers, it also demonstrated the versatility of the Minutemen; it’s safe to say there were few other punk bands flavoring their sound with tinges of country and polka. Calexico adds further elements by using a steel guitar and a horn section to give the song a mariachi feel.

Karate – This Ain’t No Picnic (The Minutemen cover)

That raw vocal anger exhibited by D. Boon on “This Ain’t No Picnic” is the result of his time spent working at an LA auto parts store. When he asked if he could change the radio station to a local jazz and soul station, his boss denounced Boon’s choice in music with some very ugly and racist comments. Appalled, but being broke at the time and in desperate need of a paycheck, Boon channeled his fury into the writing of this song. His abrasive guitar sound, when juxtaposed with Mike Watt’s smooth bassline and George Hurley’s tight drumming, ends up sounding very Gang of Four-esque. Karate approaches their cover by infusing their own brand of indie-jazz and ramping up the focus on the blistering guitar solo about midway through the song.

The Minutemen faced a lot of criticism in their early days as a band, mainly from audience members who perceived them to not be punk enough. Their working-class roots and lack of formal music education led them to appreciate a wide range of music, which is evidenced by their earnest affinity for the Creedence Clearwater Revival catalog (they recorded two other Creedence covers). This cover of “Have You Ever Seen the Rain” is an unusual addition to their discography, as it clocks in at just over two and a half minutes – a near-epic length compared to their vast array of sub-minute jams.

The Minutemen – The Red and The Black (Blue Oyster Cult cover)

Blue Oyster Cult is  another band that seems completely antithetical to the whole punk rock aesthetic with their radio- and arena-friendly brand of hard rock. The Minutemen’s “The Red and the Black” somehow manages to avoid making the guitar and bass solos overindulgent, and the result is a toe-tapping and infectious cover song.

There is probably no other band that epitomizes the excesses of rock music quite like Van Halen. Their “Ain’t Talkin’ Bout Love” starts off with a blistering guitar riff from virtuoso Eddie Van Halen and only gets bigger from there. In the Minutemen’s cover, Boon condenses this song down to under a minute and tackles it with a ferocity and fervor that probably took a lot of unsuspecting concert-goers by surprise, as the song was over by the time they knew what hit them.

For more about the history of The Minutemen, check out We Jam Econo (available on Netflix), a documentary that delves deeper into the history and lasting influence of the band.

2 Responses to “In Memoriam: D. Boon”