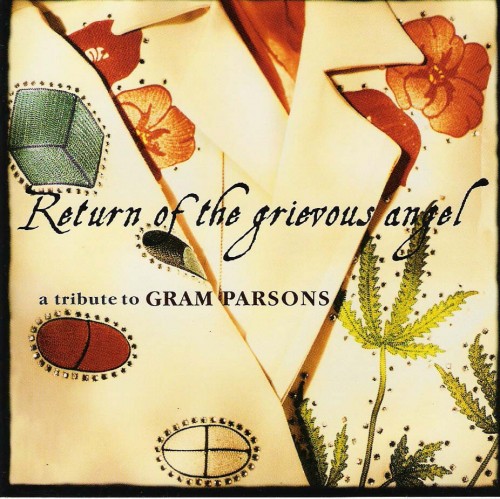 If we took the philosophy of the last opinion to heart, this site wouldn’t even exist. While the so-called purists would deny any version other than the one by the original artist as being legitimate, it certainly would be a dull world if all musicians were content to color within the lines without recognizing that someone else before them drew those lines. While Conmemorativo does contain some gems, there are two reasons why Return of the Grievous Angel is better: great production values, and the guiding hand of Emmylou Harris, who worked so closely with Parsons and who served as executive producer of the compilation. So count us among the members of that first camp. Now let’s meet the man who inspired the album.

Parsons’ career was a short one. He miraculously joined The Byrds in the late ’60s at the age of 21, with not much of a musical résumé to speak of. His youthful influence steered the Byrds to an early country-rock masterpiece, Sweetheart of the Rodeo. From there, his hard living led him to a place where he both took control of his music and ultimately lost control of his whole life (Parsons’s tour jacket, featured on the tribute’s cover above, is a “Where’s Waldo” of drug culture). First, he was kicked out of the Byrds — officially because he didn’t want to tour the apartheid state of South Africa, reportedly because he wanted to hang out with the Rolling Stones. He was booted from the Flying Burrito Brothers, the post-Byrds band he formed with Chris Hillman, because he was partying too much with… wait for it… the Rolling Stones. (He crashed the Stones’ Let It Bleed sessions in California, but was so wasted Mick Jagger told him to get back to work.) When he finally went solo, picking up a young Emmylou Harris for his band, he only recorded two albums; the second didn’t even get released until after his alcohol and morphine overdose at the age of 26.

There’s some chaos after his death to complement the chaos of his life: there was an intense fight over where he should be buried, temporarily resolved when his friends stole his body from an airport and, well, almost cremated him in Joshua Tree National Park as per his last wishes (a story so crazy they made a movie out of it). Music fans everywhere contentiously debate the weight of his legacy in putting country rock on the map. Regardless, he had a direct influence on many artists who perform in the genre that’s been called alt-country, cowpunk, y’allternative, roots rock, No Depression, or Parsons’ preferred term, Cosmic American Music. Whatever you call it, the artists on this disc obviously revere him.

One of the benefits of Emmylou Harris holding the reins is that she sings or plays on a third of the songs, bringing back the magic of her original collaboration with Parsons. The sequencing of the tracks is just stellar, and though the 13 songs were recorded in several different places under the eye of several producers, the warm tones that permeate the disc help the songs segue into each other. There’s also a treasure trove of session players here: the Heartbreakers’ Benmont Tench, producer Ethan Johns, a pack of legendary pedal steel players, and a host of other musicians who have played with everyone from Henry Rollins to Waylon Jennings. Let’s look at a few songs.

Parsons wrote “Ooh Las Vegas” as a rockabilly song with a dark side, but Cowboy Junkies pull down the shades and blot out the sun. A trio of Margo Timmonses welcome you to Sin City, but the dice keep coming up snake eyes. As Margo wakes up to an Excedrin breakfast, the psychedelics kick in for Michael Timmons as his guitar noodles around the hotel roulette table.

Lucinda Williams had just released Car Wheels on a Gravel Road when she cut “Return of the Grievous Angel” with David Crosby. Some critics pan Crosby’s lethargic walk through the tune, but Williams is wearing the big belt buckle here and belts out the song with the experience of someone who’s hit every pothole on the road of life.

“$1000 Wedding” is perhaps Parsons’ best song lyrically: a story of a groom who thinks he’s jilted at the altar, only to be the last one at the wedding to find out she’s mysteriously passed away. After a hard night of wake-style drinking, our hero faces some honest truth about his bride’s past, and then the song closes to the funeral at the end. Dando sounds like he’s singing at a leisurely pace, but his cover moves miles faster than the original, and with the warmth of a whiskey flask people are sharing among the pews.

Whiskeytown — A Song For You (Gram Parsons cover)

Caitlyn Cary’s fiddle takes a hold on the listener right from the start of the track, then the band settles back into a relaxed toasty groove that brings out the highlights of the original, melting seven musicians together into the embers of a fireplace in the listener’s living room. Ryan Adams takes a defibrillator to Parsons’ charred heart, bringing it back to life from the gasoline-soaked ashes of Joshua Tree only to set it free to roam in the wild desert hills.

Return of the Grievous Angel is available on Amazon.com

One Response to “Cover Classics: Return of the Grievous Angel: A Tribute to Gram Parsons”