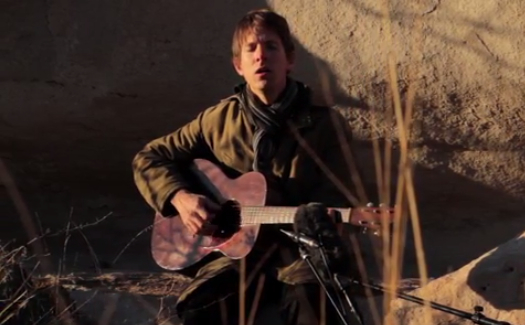 In the second installment of their four-part “State Songs” series, A.V. Club and the state of Texas have Jonathan Meiburg (of Shearwater and Okkervil River) taking on Roy Orbison‘s classic “It’s Over.” Unlike our beloved A.V. Undercover, the series isn’t specifically a cover series; it’s just our incredible luck that a cover is what Meiburg chose to play.

While there’s certainly no shortage of sponsored videos of musicians, this is among the very few where the association delivers as much to the art as anything. Meiburg’s take on the song is beautiful, haunting, heartbreaking, and seems as though there’s no other way in the world that it could be played but alone with an acoustic guitar in the middle of the West Texas desert. It is not to be missed. The music starts at 1:17, but the introduction is well worth a watch as well. (via A.V. Club)