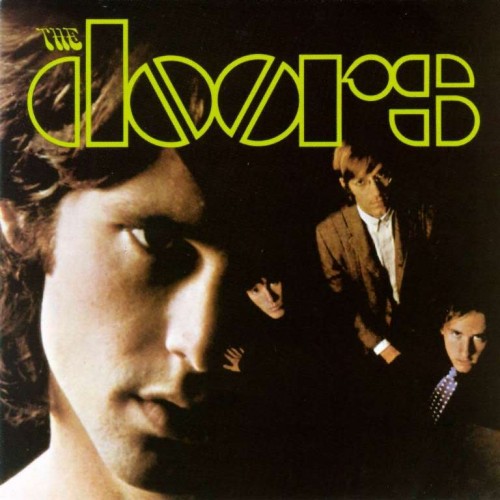 The Doors are in the unfortunate position of being overwhelmed by their mystique. They were never a band that coasted on an image – they released eight albums (six studio, one live, one best-of) in the five years before Jim Morrison’s death, and two more studio albums afterward. Their dark voice was not always welcome in the peace ‘n’ love sixties, but they never stopped raising it. Some of their albums are spotty, but the best of their work has stood the test of time better than that of many if not most of their contemporaries. Alas, too many people today know them as nothing more than a vehicle for Morrison to wield the persona that famously led Rolling Stone to declare him hot, sexy, and dead. But in 1967, there was nobody like them, and their self-titled debut album proved them to be a cohesive unit with a vision only those four men could convey.

Today The Doors stands as their finest single work, and a prime candidate for the Cover Me Full Album treatment. We’ve taken the eleven tracks from the album and found eleven covers that breathe new life into old favorites. If you want to hear a classic refreshed, read (and listen) on…

James Lee Stanley recorded an acoustic all-Rolling Stones cover album titled All Wood and Stones; it won a fan in Doors drummer John Densmore, who offered to help Stanley on his next project. The result? All Wood and Doors, an all-Doors album with Densmore and Doors guitarist Robbie Krieger guesting. It opens, as the Doors’ debut did, with “Break on Through,” a song worth more than $15 million in cash (at least, Cadillac offered that much to use the song in a commercial and was denied) and far more than that in significance. Stanley and his collaborator Cliff Eberhardt replay the explosion into a new reality in slow motion; the end result is not the balm for the soul it first appears to be. (For more about All Wood and Doors, click here.)

Krieger and Densmore aren’t the only Doors to appear on covers of their work; organist Ray Manzarek not only played on X’s four-on-the-floor cover of “Soul Kitchen,” he produced Los Angeles, the classic X debut where the song appeared. Where Morrison’s wish to stay all night was couched in seduction, Exene Cervenka personifies The Thing That Wouldn’t Leave, proud to wear a badge of danger and refusing to let you be.

Nicole Atkins’s voice is often compared to Roy Orbison’s; on her cover of “The Crystal Ship” (from the EP Nicole Atkins Digs Other People’s Songs), it brings to mind the work of Patti Smith. The lush arrangement, and Atkins’s alto that won’t quit, change the original from a ballad to something different, bigger, worth stopping and paying attention to.

Jim Steinman, best known as the guy behind the guy on Meat Loaf’s Bat out of Hell, amassed a one-off agglomerate named Pandora’s Box to record his rock opera Original Sin. This pridefully overblown story about lust and love and more lust featured a cover of “Twentieth Century Fox,” which included references to Jimi Hendrix, Wilson Pickett, and a certain movie studio. You’ll also find lead vocals sung by Ellen Foley, best known for demanding to know right now if you loved her and would you love her forever.

No one will ever know how many teenagers were introduced to the works of Kurt Weill via the Doors’ cover of “Alabama Song (Whisky Bar),” but by now the number is probably in the low eight figures. On his album Prozak for Lovers II, Bruce Lash gives the song the bossa nova beat, making it clear that the singer must have whiskey – but in a spot like this, a caipirinha will do very nicely.

“Light My Fire” is, of course, the song that broke the Doors nationwide, garnering hundreds of covers in the process. Recently, the blog Dangerous Minds posited the question, “Is the very best Doors cover, ever, by Shirley Bassey?” They make a very convincing argument – but not as convincing as Bassey herself. The woman known best for her beyond-potent rendition of “Goldfinger” gives a performance that’s both alluring and forceful. Good luck getting out of her way.

It’s amazing to learn that Willie Dixon didn’t write “Back Door Man” until after JFK had taken office: it’s one of those songs that feels like it’s been around forever. Howlin’ Wolf defined it, and the Doors popularized it; Mama Roo’s sole album, a self-titled affair from 1990, keeps the flame burning hot on their greasy cover.

The Fuzztones – I Looked at You (The Doors cover)

The Fuzztones are garage rockers ne plus ultra, based in New York but huge in Europe. They take “I Looked at You” from a band that may never have seen an oil-spattered cement floor in their lives, and they remake it into a different kind of ’60s relic, one that’s just as full of life as its creators meant it to be.

Rhea’s Obsession – End of the Night (The Doors cover)

Darken My Fire: A Gothic Tribute to the Doors was a 2000 tribute album that put an even darker spin on the Doors’ songs than ever before. Some of the artists went for the industrial/metal vibe, but Rhea’s Obsession took “End of the Night” and submerged it in lush waves of noise, giving the song a narcotic layer of otherworldliness.

The Ramones – Take It as It Comes (The Doors cover)

Mondo Bizarro, the Ramones’ 1992 album (their first with bassist CJ Ramone), featured yet another Ramonified cover; this time, they took “Take It As It Comes,” somehow managed to keep it from moving much too fast, and proved once again that when it came to cover songs, they knew how to specialize in having fun.

Nico – The End (The Doors cover)

“The End,” the Oedipal opus that brings The Doors to a close, is a work of art that could only have come from Morrison, Manzarek, Densmore, and Krieger – and yet, somehow, it’s also become synonymous in certain circles with Nico, the German chanteuse who collaborated with the Velvet Underground to help make their first album the masterpiece it was, and who was briefly addicted to Morrison. Her fourth album includes a song called “You Forget to Answer,” about trying and failing to reach Morrison on the day he died, and “The End,” the album’s title track, in which she sounds spent, doomed, unable to resist being pulled through the song by a force she knows only too well. It’s a harrowing performance, one that drains its listeners of almost too many emotions, and it’s the only way to honestly close this full album cover collection.

The original version of The Doors is available on iTunes and Amazon; learn more about them on their website.

3 Responses to “Full Albums: ‘The Doors’”