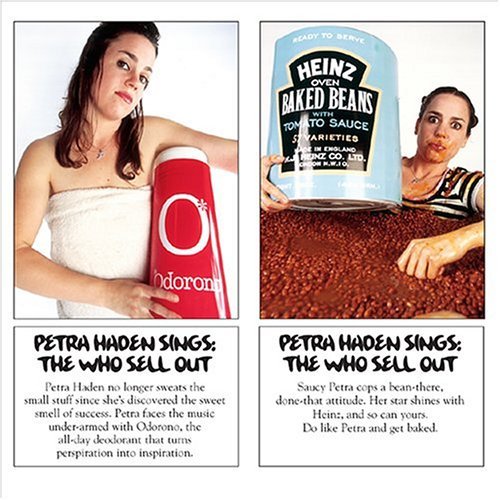 I heard the music as if for the first time. I listened all the way through in one sitting and was struck by how beautiful a lot of the music was. Petra’s approach is so tender and generous. I adore it. – Pete Townshend

It’s unlikely that the ringing in Pete Townshend’s ears was ever louder than the ringing endorsement he gave Petra Haden Sings: The Who Sell Out. An a cappella recreation of the entire 1967 album, it features Haden’s vocals and more of Haden’s vocals, not only singing the lyrics, not only the between-song jingles, but all the instrumental passages. What can’t be perfectly duplicated (people have enough trouble capturing Keith Moon’s sound with a full drum kit) is suggested; Haden gets the feel of the album and gets it across to the listener. The masterful result brought plaudits from Townshend (“I felt like I’d received something better than a Grammy”) and critics alike. Not bad for someone who’d never heard the album before she began recording it.

The idea for recording The Who Sell Out was brought to Haden by Mike Watt, a devotee of the album; he and his Minutemen bandmate D. Boon had talked of recording their own all-singing version, but never got the chance before Boon’s death. Haden took Watt’s suggestion and an old eight-track recorder, working on the project, off and on, for three years. She wasn’t satisfied with the results, and never intended it to be released, but enough people expressed appreciation that she was eventually persuaded. Listen to these five tracks and you’ll see why so many were so grateful.

Armenia City in the Sky – Petra Haden (The Who cover)

The opening track of The Who Sell Out, “Armenia City in the Sky” (itself a cover, written by Speedy Keen) was filled with splashes and swirls of psychedelia, featuring backwards brass and guitars. From that first arcing “French horn” note, Haden’s cover somehow conveys all the magic available to you if you close your eyes and just take off.

Our Love Was – Petra Haden (The Who cover)

“Our Love Was” is a melodic and unusually romantic number, with Townshend singing lead on the original album (Roger Daltrey has fewer lead vocals on Sell Out than Townshend does). Haden handles it very well, then handles the flurry of pirate-radio ads that follow even better.

I Can See for Miles – Petra Haden (The Who cover)

The first Who song to chart higher in America than England, “I Can See for Miles” stands today as one of the greatest Who performances – every musician was on his game here. Haden isn’t setting out to top the original, but to bring across its sentiment; in her hands, Townshend’s deceived, betrayed lover is now female, and hell hath no fury…

Relax – Petra Haden (The Who Cover)

“Relax” is where the original album’s pirate-radio-salute concept started to fall apart; it was as though the (great) song was above all the affectionate jibes that had taken place beforehand. Haden’s album has the advantage of maintaining its own all-voices-all-the-time concept throughout; therefore, the flaws of the original simply aren’t flaws in the remake. All to say, “Relax” marks the point where Haden’s work truly begins to rise above its source.

Sunrise – Petra Haden (The Who cover)

“Sunrise” was one of the prettiest songs Townshend ever wrote with the Who, a solo piece featuring an evocative acoustic guitar and his own yearning vocals. Haden’s version is arguably the highlight of the album – not only does she capture every last nuance of the guitar solo (those last few quiet notes are so exactly dead on), but her delivery of the lyrics is beautiful. This song proves that power doesn’t have to be conveyed by volume alone.

Petra Haden Sings: The Who Sell Out is available on iTunes and Amazon; her newest a cappella cover collection, Petra Goes to the Movies, was released on January 22.

One Response to “Cover Classics: Petra Haden Sings: The Who Sell Out”