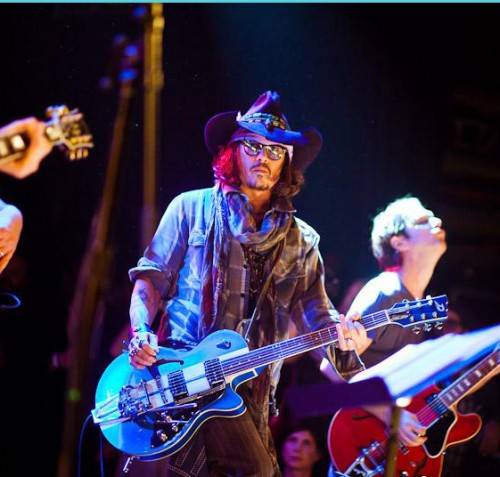 This year Petty Fest made the leap to a bi-coastal event. On November 14 & 15 at the El Rey in Los Angeles, the Tom Petty tribute brought the stars out in force to benefit Hurricane Sandy victims. Special guests included Johnny Depp, Sarah Silverman, Har Mar Superstar, Albert Hammond Jr. of The Strokes, Peter Ericsson Stakee of Alberta Cross, bassist from Kings of Leon, Ke$ha, Eagles of Death Metal, Karen Elson, Nicole Atkins, Patrick Carney from The Black Keys, Cory Chisel, Butch Walker, the lead singer from Guster, the drummer from Guns-n-Roses and more. All proceeds went to the victims of the storm via Sweet Relief Musicians Fund which provides financial assistance to all types of career musicians who are struggling to make ends meet while facing illness, disability, or age-related problems.

Paying homage to the veteran American rock songwriter highlights included: Nicole Atkins and Karen Elson’s performing a duet of the Stevie Nicks & Tom Petty classic “Stop Draggin’ My Heart Around”, Albert Hammond Jr. and Nick Valensi of The Strokes covering “I Need to Know” and “Honeybee” and The Eagles of Death Metal shredded “Runnin’ Down A Dream.” Johnny Depp was featured on guitar for half a dozen songs including “Mary Jane’s Last Dance” featuring Ke$ha, Patrick Carney, Nicole Atkins, Corey Chisel and the Cabin Down Below Band. Watch Depp doing his finest Keith Richards impersonation in the video below.

For more info on Petty Fest check out the website.