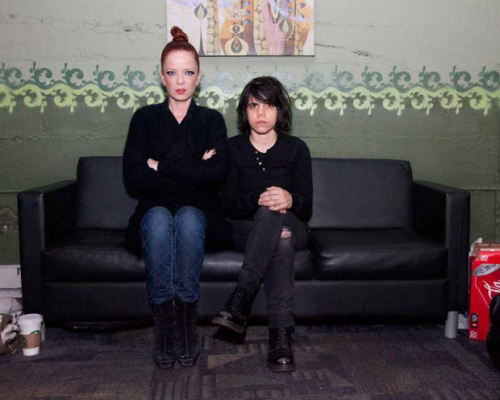 Just two weeks into their Fall 2012 tour, Jersey indie punkers Screaming Females have had to cancel the rest of the dates. The word from their publicist:

“Since falling ill with mononucleosis in May, Marissa Paternoster has been experiencing severe chronic pains that have rendered it very difficult for Screaming Females to tour. To ensure that Marissa has adequate time to heal so that Screaming Females can continue, it brings us great sadness to announce that all scheduled dates after October 10th will be cancelled.”

The fortunate folks who went to the first few nights got to see the band with alt-rockers Garbage in a co-bill.  During the final show of the tour in Houston, Marissa Paternoster of Screaming Females joined Garbage on stage to trade lines and play some shredding guitar on a cover of Patti Smith‘s classic “Because the Night.” The track was a hit from her 1978 album Easter and co-written by Bruce Springsteen.

In the video below, Shirley Manson introduces the “smart, funny rock star Marissa Paternoster, who has done nothing but give me shit on this entire tour. No fucking respect right here!”  The powerful duet then goes on to pay their respects to the Godmother of Punk with a ferocious and faithful take.

Go to the Garbage and Screaming Females websites for more info.