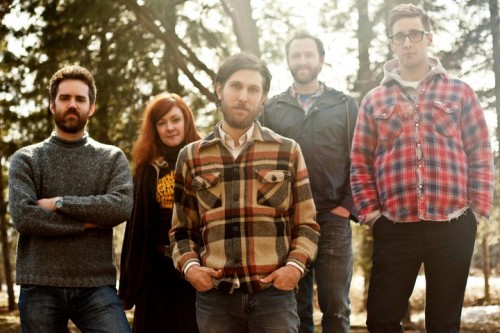 It feels a little strange putting the Great Lake Swimmers in the “Under the Radar” category. After all, they’ve been recording albums for over a decade – their fifth, New Wild Everywhere, came out earlier this year. They’ve toured the world and elsewhere, with adoring crowds currently flocking to see them throughout Europe. They have nearly 50,000 Facebook fans and hundreds of thousands more around the planet. And yet, they’re still known for being little-known, their ambient-folk sound ever reluctant to cross the mainstream.

One more blog entry may not give Tony Dekker and company their passport to fame and glory, but if it can provide a gateway to potential fans – those who know and love the few songs the Great Lake Swimmers have performed near-definitive covers of – then the world may well become an incrementally better place. We think it’s worth taking that chance.

2011’s excellent Paint it Black: An Alt-Country Tribute to the Rolling Stones leads off with the Great Lake Swimmers doing “Before They Make Me Run,” Keith’s defiant self-assertion from Some Girls. Here, it’s quieter, and comes off less a shout to the crowds than a vow to the self – a vow that’s got a soft beat, and you can sway to it.

Townes Van Zandt’s Southern gothic classic “Our Mother the Mountain” has a richer sound in this cover than in the original, but the added beauty and echo don’t distract from the singer’s grim prairie tale.

Over the course of five decades, there’s been a concerted effort to make Neil Diamond a walking punchline – an effort Neil has not been known to discourage (two words: Saving Silverman). But whenever the focus moves to Diamond’s songs, the effort crumbles; the best of his work retains all its power, its warmth, its singalongability. Musicians know this, and the best of them know how to put their own stamp on the material. Witness the Great Lake Swimmers’ hushed, sad, and ultimately moving “Song Sung Blue.”

Another Neil cover (Young, this time), another tribute album – this version of “Don’t Cry No Tears” comes from Borrowed Tunes II, by way of 1975’s Zuma. The Swimmers trade Crazy Horse’s psychedelic garage for a leaf-covered woodshed, while duplicating Young’s feat of mixing a little sadness with a lot of lack of self-pity.

Performing before a crowd that doesn’t have the courtesy to shut up, the Swimmers close out a show with a Tom Waits cover, bringing their sense of benevolence to “Innocent When You Dream.” Replacing Waits’ whiskey growl with Dekker’s sweetly mournful murmur can’t help changing the song’s sound, but the song doesn’t suffer in the least for it – something even the distracted crowd comes to recognize by the end.

Learn more about the Great Lake Swimmers on their website.

3 Responses to “Under the Radar: Great Lake Swimmers”