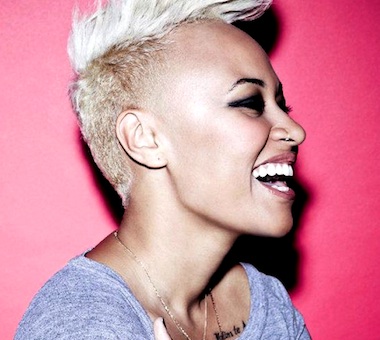 Their CD isn’t exactly “new”  anymore, so it’s been a while since we’ve heard a good Coldplay cover. That being said, Scottish singer/songwriter Emeli Sande simply couldn’t ignore the potential in the bands vast musical catalog. The word potential should be used delicately here, because Sande exceeds any preconceived idea of it. She recorded her own acoustic version of the bands “Every Teardrop is A Waterfall” with 1 microphone, in 1 take, in the Capitol recording studios.

At first listen the song is hardly recognizable as the original Coldplay hit. However, this is far from a bad thing. Sande slows down the original upbeat version by singing along to a single guitar. The vocally gifted singer hits notes that Chris Martin doesn’t come close to in the original and she even manages to insert emotion into lyrics that aren’t necessarily emotionally heavy. All the while, she manages to maintain the carefree attitude Martin pegged in the original. It showcases Sande’s undeniable gifts and reminds us all why we love the UK for its consistent talent.

Emeli Sande – Every Teardrop is A Waterfall (Coldplay Cover)

Check out more from Emeli Sande on her website.