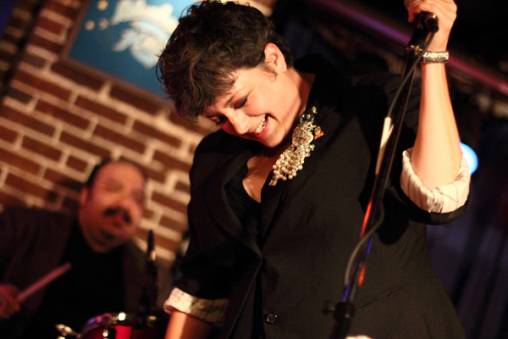 In August singer-songwriter Kelly Hogan and her band were featured in the AV Club’s Undercover series, which we’ve covered extensively here at Cover Me, but breaking away from the normal setting, Hogan moved the taping of their cover of The Hold Steady’s “Constructive Summer” out into the summery outdoors. Instead of the familiar graffiti-covered round room, for this video they set up on the front porch of Chicago’s The Hideout, where Hogan used to tend bar. Keeping it simple with only acoustic guitars and a single snare drum, the band’s cover of the youthful, summer anthem turned out impressively accurate.

With only one string on her archtop guitar, Hogan captures just enough of the song’s pounding grit. Her vocals and the acoustic guitar picking give it a different feel though, turning down the youthful exuberance that makes the original such a good June song and replacing it with the earnest self-awareness of mid-August. The band seems to be having a great time with their background vocals too. Its nice to hear Craig Finn’s lyrics so clearly presented, his mumbling sometimes obscures nuances and subtle word choices in his writing. Hogan acknowledges the difficulties of performing his lyrics at the beginning, and s the he proves more than worth of the task.

Check out more from Kelly Hogan on her website.