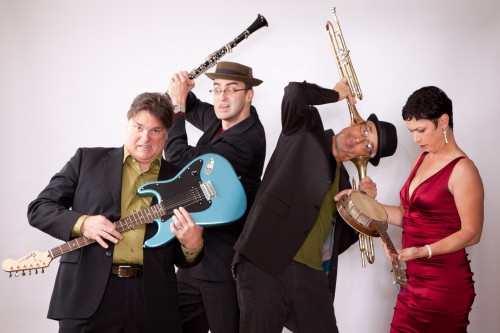 The Bobs are an a cappella group that pride themselves on their originality – and when you’re writing songs with titles like “Mopping, Mopping, Mopping,” “Andy Always Dreamed of Wrestling,” and “Please Let Me Be Your Third World Country,” there’s clearly a lot of originality to be proud of. There’s just as much originality in their renditions of songs they didn’t write, and they’ve been entertaining audiences across the US and Europe with them for almost a third of a century with nothing but voices and self-percussion.

Their longevity’s amazing enough, but the way they almost single-handedly revolutionized a cappella singing shouldn’t be overlooked, either. Not only did they take a genre associated with the cutting-edge sounds of barbershop quartets and infuse it with dynamic quirk, they refused to limit their repertoire to traditional Whiffenpoofy songs. They went from country to British Invasion to new wave to disco to acid rock – and that’s just the five songs that follow…

The Bobs replace the mariachi horns in “Ring of Fire” with their own lively imitations, giving the song an entirely different swing that’s just as perky in its own way.

The Bobs – You Can’t Do That (The Beatles cover)

After earning a Grammy nomination for their arrangement of “Helter Skelter,” the Bobs vowed they would never perform another Beatles cover ever again. I’m joking, of course. Here’s “You Can’t Do That” – if you’d seen them singing this way, you’d laugh in their face… out of sheer delight.

The disconnected menace of the Talking Heads recording of “Psycho Killer” somehow survives the de-instrumentation process as applied by the Bobs. Fun remains to be had – especially after the bridge, when it changes into an entirely different arrangement – but the stomps and claps at the end still manage to sound unsettling.

It’s hard to cover a song in a genre that’s been fossilized into camp – especially a song that’s a touchstone in that genre – and make it come alive again. The Bobs may not make “Disco Inferno” more necessary than it once was, but they do manage to bring back the fun.

The Bobs are at their best in a live setting, where their loyal fans can revel in their idiosyncrasies – not to mention their skill. This is evident in this live cut of them performing “Purple Haze,” when you can hear the crowd’s excitement at just the mention of the cover they’re about to hear. Come the performance, and you can hear the excitement double.

Bobs.com. For all your Bobs needs.

One Response to “Under the Radar: The Bobs”