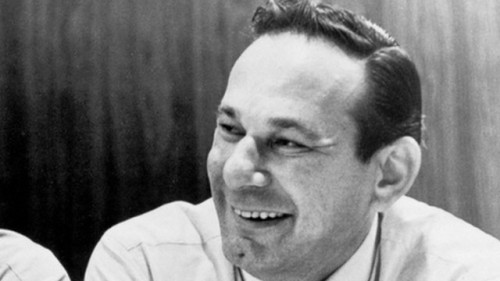 Lyricist Hal David, best known for his songwriting partnership with Burt Bacharach, died of a stroke this past Saturday. He was 91 years old.

Bacharach was always the one who got the attention – debonair, handsome, jet-setter, married to Angie Dickinson, writer of melodic lines that were intricate yet hummable. But David was the one who provided the words that brought the melodies home. Without him, nobody could have asked Alfie what’s it all about, or asked a pussycat what’s new, or asked a Californian if they know the way to San Jose, or made any of those questions a part of our national fabric. David may never have been one to perform in an Austin Powers movie – it was rare enough that he performed on any stage – but he left an indelible mark on the industry, and it’s safe to ask how we could forget him when there is always something there to remind us of his accomplishments.

As we say a little prayer for Hal and his family, join us in celebrating his work with these five covers.

Bacharach himself was the first person to record “Trains and Boats and Planes”; hit versions followed for Billy J. Kramer and (of course) Dionne Warwick. Fountains of Wayne’s rings with respect; they’re not pining for Stacy’s mom here, choosing instead to handle the topic of love not lost but missing in a gentle, sensitive way.

Isaac Hayes had previously turned Bacharach/David’s “Walk On By” into a 12-minute epic, amping up both the pleasure and pain in equal amounts. On 1971’s Black Moses, he took on the hit song from the Broadway musical comedy “Promises, Promises,” giving it a scoop of hot buttered soul that made it uniquely his.

The poignant yet uplifting hit from Butch Cassidy and the Sundance Kid‘s soundtrack is given a sense of urgency in the Manic Street Preachers’ version, which first appeared on the benefit album HELP. All the songs on that album were recorded in one day and released the following week, which may account for the abandonment of the easygoing lope of the original.

Like Bacharach, David had other songwriting partners and other hits in his career. “Johnny Get Angry” was one of those non-Bacharach hits, written with Sherman Edwards and a 1962 smash for Joanie Summers. k.d. lang revived it in her early concerts, complete with dramatic reinterpretations and crumpling to the floor, regularly taking the song over the top where it couldn’t help belonging.

David collaborated with John Barry to produce this, the love theme for On Her Majesty’s Secret Service. It’s become a wedding dance favorite for people who don’t associate it with the death of Mrs. James Bond. Fun Lovin’ Criminals put down their Scooby snacks long enough to record a cover that coasts on cool without relying on samples from Tarantino movies.

Learn more about Hal David at his official website.

6 Responses to “In Memoriam: Hal David”