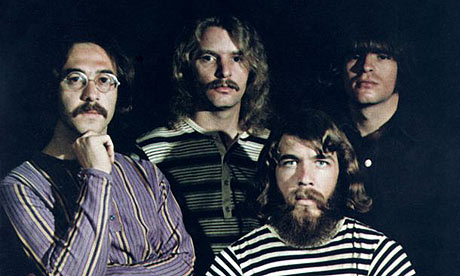 In 1970, with the Beatles broken up, Creedence Clearwater Revival was poised to take their place on the top of the musical world. But within the band, tension was coming to a head; John Fogerty had too tight a hold on the reins, as far as the others were concerned, and John’s brother Tom decided to leave the band and pursue a solo career. John’s response was to write “Have You Ever Seen the Rain,” a song that obliquely addressed Tom’s departure (“the rain coming down”) at the group’s commercial apex (“on a sunny day”). Of course, you didn’t have to know the back story to love the song, and CCR found themselves with another top ten hit and FM radio staple.

A song like this – clearly fraught with meaning, but vague enough to mean whatever you want it to mean – isn’t going to go uncovered. Here are just five of the dozens of versions out there…

Minutemen – Have You Ever Seen The Rain (Creedence Clearwater Revival cover)

Robert Christgau called D. Boon’s passing “a rock death that for wasted potential has Lennon and Hendrix for company” in his review of the Minutemen’s 3-Way Tie (For Last). The album showed the band, veterans of uncharted waters, mastering a whole new set of high seas, and included five covers; one was “Have You Ever Seen the Rain,” revealing their genuine, earnest fandom of CCR in a way they hadn’t done since… well, since their cover of “Don’t Look Now” on Double Nickels on the Dime.

Ramones – Have You Ever Seen The Rain (Creedence Clearwater Revival cover)

1993’s Acid Eaters was the Ramones finally doing the all-cover album everyone knew they were capable of, making thrashed hay of old classics; “Have You Ever Seen the Rain” is the most recent song on the album. There’s a kind of comfort in hearing da brudders’ alchemy still working with full force, and Joey’s vocals have rarely been better.

Frog Holler came by their alt-country sound honestly; in their case, the alt-country was southeast Pennsylvania, and the music they play sounds like it could have found a home in any rural American backyard. Their cover of “Have You Ever Seen the Rain” comes from the John Fogerty tribute album Chooglin’.

Noel Gallagher called Teenage Fanclub the second-best band in the world; now that his choice for number one has broken up, let’s hear from the ones who ascended to the throne. Here, they lift “Have You Ever Seen the Rain” up on a warm wave of guitars, making the song more pop with a different kind of power.

Sass Jordan’s singing has been favorably compared to Tina Turner and Lucinda Williams, and she portrayed Janis Joplin off-Broadway. You can hear them all in her take on “Have You Ever Seen the Rain,” from 2006’s Get What You Give. Her cover of the song mixes rain water with whiskey, and now it burns more than it quenches.

You can get the very first “Have You Ever Seen the Rain” on iTunes and Amazon.

4 Responses to “Five Good Covers: Have You Ever Seen The Rain (Creedence Clearwater Revival)”