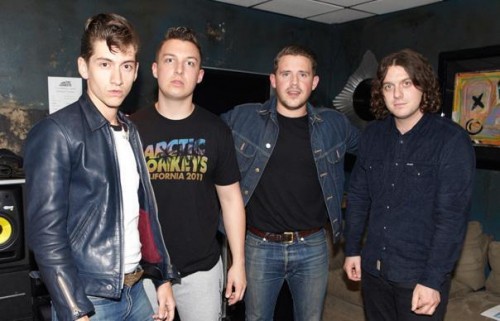 Last week’s Olympics opening ceremony has gotten a lot of news coverage for Danny Boyle’s fantastical re-imagination of centuries of British life, from agrarian idyll to the Queen skydiving with James Bond. Friday’s spectacle also showcased some of Britain’s most noteworthy musicians. Paul McCartney closed the ceremony with “Hey Jude,” and the Arctic Monkeys— sometimes touted as this generation’s answer to The Beatles – covered “Come Together” with the former Beatle looking on.

Perhaps out of respect for McCartney, the Monkeys keep their cover relatively true to the original. Alex Turner’s Sheffield accent makes the most drastic change to the track, departing noticeably from John Lennon’s vocals. The Monkeys have been developing a progressively harder, more mature sound with each album, and their current style is well-suited to the bluesy arrangement of “Come Together.” The presence of McCartney made the performance a miniature version of Boyle’s history play, showing a torch passing in the British rock tradition. Watch the video, then listen to the studio version, below.

Hear more from Arctic Monkeys at their website or Myspace.