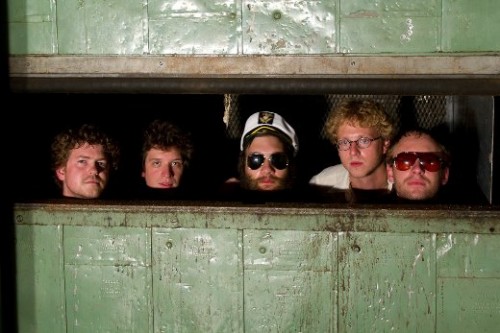 Country rockers Deer Tick are no strangers to covers, performing at times as the Nirvana cover band Deervana. Recently they headed to the AV Club’s Undercover project to take on the only Harvey Danger song anyone knows, “Flagpole Sitta.” Lead singer John McCauley admits right away that he chose the song because he “fucking loved that song” when he was a kid. Most of America’s youth agreed when it hit the airwaves back in 1998; the catchiness of the simple tune is undeniable. Deer Tick’s faithful cover doesn’t reveal anything new about the hit, but it’s a fun listen nonetheless.

McCauley’s raspy voice adds a little grit to the cover, making it sound a little “grungier” than the original. Although McCauley professed his love for the song, someone forgot to tell the rest of the band as guitarist Ian O’Neill and bassist Christopher Dale Ryan seem to be goofing around as they play and maybe even lipsynching the “bah bah bah’s” in the chorus. The song itself is simple enough that their robotic playing sounds perfectly acceptable, but near the end McCauley flips his middle finger in their direction, possibly because they seem to be mocking his song choice. But maybe he’s just doing it because he can. In the end, the Deer Tick version is equal parts nostalgia and fun, resulting in a decent cover. Watch the gang perform in the video below.