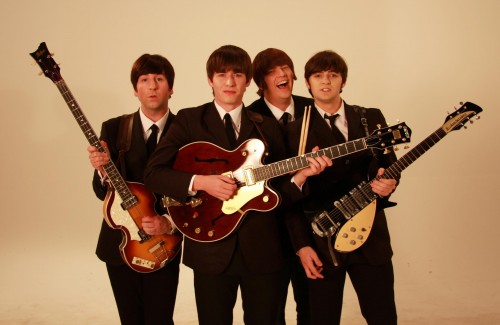 The tribute band. That staple of wedding receptions and all major birthday celebrations for those over 40. It’s hard to shake those memories of inebriated uncles dancing with drunken abandon to Guns N’ Roses songs being sung by an overweight, middle-aged, behandkerchiefed man who has yet to give up on his dreams of rock stardom. Or perhaps your mom is inspired to show everyone that she’s “still got it” by getting low to the Would-Bee Gees. Or maybe aged Auntie Brenda is making use of that new hip replacement by shaking it to “Twist and Shout.” The list of humiliations goes on. In fact, it sometimes seems that the psychological trauma inflicted on us at such events is so great that you could never embrace watching a tribute band as an enjoyable experience. You could never call it “fun.”

Well, that word never is exactly where you are wrong.

There are some (very rare) circumstances in which watching a tribute band can be wholeheartedly pleasing, but before that can happen you have to come to terms with the fact that you are watching a tribute band. That operative word, once again, is tribute. Meaning: they are not the real thing. You have to get past this, and some tribute bands can make that very difficult. They forget that the audience isn’t there for them – they’re there for the audience.

Granted, there is a school of thought that would argue: why watch paltry imitations ruin music you love – or even hate – whilst wearing ridiculous wigs and cheap costumes? It must be acknowledged that seeing a poor tribute act can be akin to some incredibly cruel form of psychological torture and that, yes, you may want to claw your own eyes out after ten minutes just so you no longer have to see the lead singer’s paunch protruding from the spandex leggings that constitute part of his Twisted Sister get-up.

But it doesn’t have to be that way.

Take Them Beatles, the Beatles tribute band that closed the 2010 ATP: Bowlie 2 festival in the UK, at the invitation of the festival curators Belle & Sebastian. That’s right, folks – a Belle & Sebastian-endorsed tribute band. The band shared the bill with the likes of The New Pornographers, Crystal Castles, Edwyn Collins and Dean Wareham of Galaxie 500, but for some reason it was Them Beatles who were allowed to have the last word and finish things off with that classic end-of-the-night anthem, “Hey Jude.”

Why was this the case? Well, in all honesty you would have to ask Belle & Sebastian, but it probably had something to do with the fact that every last one of those ATP-frequenting hipsters know and love the music of the Beatles and they will never get the chance to see them live. Even though watching bewigged imposters will never recreate the unique experience of watching John, Paul, George and Ringo do their thing, the younger generation simply does not have that opportunity. That does not mean that, if you stick a couple of hundred of them in a room and play those songs, they won’t get excited. In fact, at Bowlie 2, they were twisting and shouting with the best of them – just like Auntie Brenda.

And Them Beatles aren’t the only tribute band out there capable of entertaining a crowd – take a look at this Bjorn Again cover of ABBA’s “S.O.S,” cleverly fused with “Message in a Bottle” by The Police, which was performed at the Royal Albert Hall, London.

The fact remains that, even though they can play large capacity venues and ATP festivals, it doesn’t make tribute bands cool. But that’s not really what it is about, is it? OK, they are not the original artists and whilst it is surely not acceptable to dilute musical genius or defile popular classics, people have been covering Franz Liszt – the Jimi Hendrix of piano music – and his inestimable performances for over a century now and no one seems to mind very much… so maybe we should just be a little less precious about our pop legends?

Next time you see a tribute band, try and avoid making eye contact with embarrassing relatives and just treat it as what it is: a bit of fun. It’s not cool and it might not be the most musically astounding performance you ever see, but if you are lucky enough to have some great songs and some great company – what more could you want?

5 Responses to “In Defense: Tribute Bands”