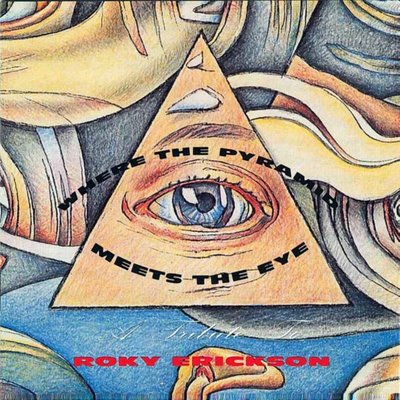 In 1990, Roky Erickson, fresh out of incarceration for mail theft, was institutionalized. He was a poverty-stricken paranoid schizophrenic who had it legally notarized that he was from Mars. He was also a giant in psychedelic garage-rock circles for his work with the 13th Floor Elevators in the ’60s and his later solo work, a man who knew how to let the demons wail. Bill Bentley, once a teenage diehard fan of the Elevators and now an music executive at Warner Brothers, learned that Erickson was in dire financial straits and organized a tribute album to help him out. That album, Where the Pyramid Meets the Eye, didn’t just provide Erickson with a desperately needed influx of cash; it introduced the world to a desperately talented songwriter, via a slew of artists who knew a good song when they played one. Kudos to all involved for bringing the buried treasure of Erickson’s songwriting to the surface, sharing its riches with the world, and seeing Erickson to that next plateau.

Screamadelica is considered one of the greatest albums of the ’90s, a landmark in the melding of acid house and indie rock. Its second track, “Slip Inside This House,” had bowed the year before on Pyramid; some of the words have been changed (it’s “trip inside this house” here), but the Scream perfectly capture the psychedelic explorations of the mind Erickson had sung about a quarter century before.

Bongwater – You Don’t Love Me Yet (Roky Erickson cover)

Thanks to Bongwater, “You Don’t Love Me Yet” made it onto a lot of college DJ’s flirting mix tapes. Kramer and Ann Magnuson worked together to make a swooning, longing song that somehow negates the pain of the lyrics. Was that the only way they could have done it? Check the sound bite at the end for Bongwater’s answer.

It’s quite possible that some of the artists on Pyramid were unfamiliar with Erickson’s work before they answered Bentley’s call, but that wasn’t the case with Richard Lloyd. When he was in Television, the band often opened their shows with a cover of “Fire Engine,” with Tom Verlaine singing lead. Here, Lloyd gets the job done on vocals, and his guitar brings both ’60s and ’70s punk back to the present day, and in full living color to boot.

Like the Elevators, the Butthole Surfers were Texans known for ingesting substances and following their effects wherever they may go. Perhaps because of this, their take on “Earthquake” is one of the strongest songs on the album, as they chase themselves headlong down any number of cacophonous rabbit holes.

The chaos in Erickson’s mind may have flourished, but it wasn’t able to obliterate the tenderness in his heart. His song “Nothing In Return” was a treasure about unrequited love, and in the caring hands of T-Bone Burnett, its message, while painful, takes on a truly universal resonance.

Where the Pyramid Meets the Eye is available on iTunes and Amazon.

3 Responses to “Cover Classics: Where the Pyramid Meets the Eye: A Tribute to Roky Erickson”