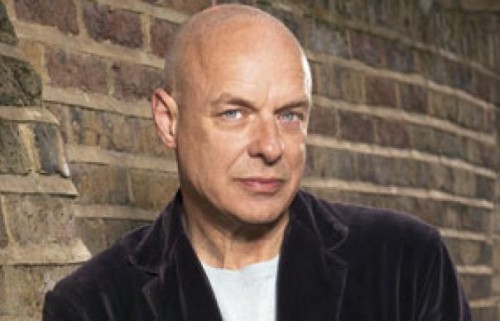 Brian Peter George St. John le Baptiste De La Salle Eno turns 64 today. Here are some reasons we will still need him and feed him: 1) He co-founded Roxy Music and proved you could be flashier and suaver than Bryan Ferry; 2)He invented ambient music; 3) He produced the best albums by U2, Devo, and Talking Heads, not to mention his involvement with David Bowie’s Berlin Trilogy; 4) His Oblique Strategies cards are to writer’s block what the Salk vaccine was to polio; 5) The noise Windows 95 makes when it opens? He wrote that; 6) He shows absolutely zero signs of stopping.

Ironically, Eno calls himself a “non-musician” who prefers not to compose his songs with lyrics, as they inevitably become the focal point of the song. Which is a shame, as his voice has a warm resonance and his verses and choruses have proved ageless. Listen to these five Eno covers and hear for yourself.

Needle in the Camel’s Eye – The Wolfmen (Brian Eno cover)

Little Steven Van Zandt featured this cover of “Needle in the Camel’s Eye” on his Underground Garage radio show and released it on his Coolest Songs in the World series. The man knows what he’s talking about; the opening track from Eno’s debut Here Come The Warm Jets sounds just as adventurous today as it did four decades ago – a note-for-note cover can’t help but be riveting.

“Golden Hours” first appeared on 1976’s Another Green World, one of the few tracks on that album with a vocal performance. Ida captures its delicacy very well, and even adds a hint of campfire to Eno’s electronica.

Phil Manzanera called for help with his first solo album; former bandmate Eno answered the call by, among other things, co-writing and singing “Big Day.” A decade-plus after its release, Yung Wu – basically, the Feelies led by percussionist Dave Weckerman – covered it on their Shore Leave album, rounding out the stop-and-start edges of the original and making “gay Peru” even more irresistible.

“King’s Lead Hat” (find that anagram!) was originally on 1977’s Before and After Science, the album that marked the end of Eno’s lead vocals for over a decade. At least he went out with a bang, one that Ultravox recreates beautifully in this live cover, stormy and dynamic without ever losing an ounce of control.

In 1990, Eno briefly returned to the world of accessible pop music with Wrong Way Up, his collaboration with John Cale. “Spinning Away” captures the freeness and beauty of the natural world as the sky turns from violet to raven, beyond our understanding but not our appreciation. Sugar Ray’s cover appeared on the soundtrack to The Beach; well into their 14th minute, they still found it in themselves to bring Eno’s song to a new generation, with a quality that deserves to resonate for generations to come.

Learn more about Brian Eno here, and be inspired by some of his Oblique Strategies here.

2 Responses to “They Say It’s Your Birthday: Brian Eno”