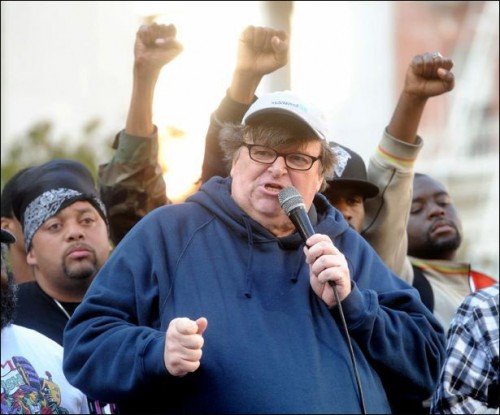 American filmmaker and social activist Michael Moore took part in more than a dozen Occupy Wall Street #OWS protests all over the U.S. over the last eight months. Last week Moore posted on his Twitter feed that he would be dropping some news for his followers. The next day word that he is contributing to the Occupy This Album benefit album with his very own rendition of Bob Dylan’s “The Times They are a-Changin’” was a surprise indeed.

“They had asked me 2 direct a music video of the album. I said,‘You don’t want me 2 sing a song?’ They called my bluff & said ‘Yes! Sing!’ Ha!” Moore tweeted. The song is a pre-release with the rest of the album due out May 15. For just $9.99 get 99 songs on a compilation CD that is described as ”99 tracks — 99 artists for the 99 percent.” Other artists featured on the album include Patti Smith, Crosby and Nash, Ani DiFranco, Joan Baez, Third Eye Blind, Willie Nelson, Yoko Ono and more with all proceeds going to benefit the Occupy Wall Street movement. Have a listen and let us know what you think.

Get more info on Michael Moore on his website.