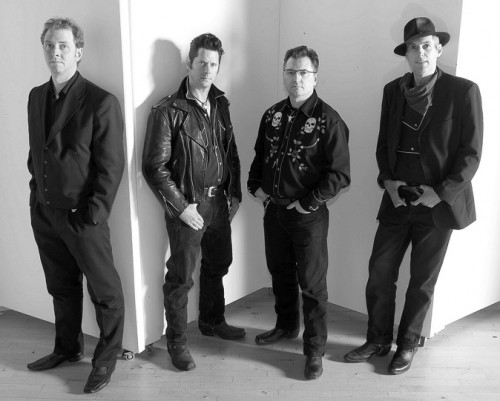 In Memphis, Tennessee, Union Avenue is the name of the street where the legendary Sun Studio is located (706 Union Avenue to be exact, if you want to give your GPS a workout). In Edinburgh, Scotland, Union Avenue is the name of a band steeped in rockabilly-roots music that sounds like it got its start under the watchful eye of Sam Phillips himself. Both Union Avenues have a rightful claim of the legacy of Johnny Cash – Memphis was where Cash laid the first bricks in the building of his legacy, and Edinburgh is not only Cash’s ancestral home, it’s the home of bandleader Andrew Cardno, whose playing and singing make him sound possessed by the spirit of the Man in Black.

But this is no Cash tribute band – rather, it’s the Cash sound that’s being honored, and while the band do fine work with Cash originals, they’re more interested in what can be made of other musicians’ work once a little boom-chicka-boom has been added. The more unlikely, the better – Lou Reed, Billy Idol, Bob Marley, and the Rolling Stones are just a few whose songs have gone down Union Avenue and come back out as something else entirely. Herewith, a few more…

Union Avenue’s first release, 2001’s Ace of Spades EP, set the tone quickly – six songs that sounded like Johnny Cash had written and recorded them first (one of them, “Big River,” he had). The leap wasn’t always that great; CCR‘s “Bad Moon Rising” sounded like a throwback when it first came out, so the Sun Studio sound Union River gives sounds, not grafted on, but long overdue.

Union Avenue – Should I Stay Or Should I Go? (The Clash cover)

Union Avenue’s transition from slow to fast in “Should I Stay or Should I Go?” differs considerably from the Clash‘s. The start off the song in a pokey fashion, with a few weepy steel guitar notes. Then comes the chorus, and it sounds like the song’s jumped the Orange Blossom Special.

John Peel loved the Undertones’ “Teenage Kicks” so much he requested that some of its lyrics be engraved on his tombstone. But it’s safe to say he never pictured it including lyrical and musical quotes from Cash’s “Ballad of a Teenage Queen,” “Ring of Fire,” and “I Walk the Line.” That’s what Union Avenue give it here, and it’s hard not to imagine Peel loving this as well.

Union Avenue’s most recent album is called Sing Quentin and is made up of covers of songs that were featured in Quentin Tarantino movies. “Little Green Bag” was the song that accompanied Harvey Keitel and company moving in slow motion at the start of Reservoir Dogs. Union Avenue’s version may never show up on K-Billy’s Super Sounds of the Seventies, but it wouldn’t be a bad fit on a show set fifteen or twenty years earlier.

Union Avenue is the sort of band that sounds great in the studio, but put them in a live setting, and on a good night they can sound transcendent. Here they are in front of a cranked up crowd, performing what’s become their signature cover, Motorhead‘s “Ace of Spades.” It sounds born for the propulsive boom-chicka-boom sound, rightly taking its place in the annals of country and western card-playing songs. It’s hard to imagine this not getting a smile out of Lemmy – or, for that matter, the Tennessee Three.

You can find more of Union Avenue’s music on iTunes, Amazon, and their website.

One Response to “Under the Radar: Union Avenue”