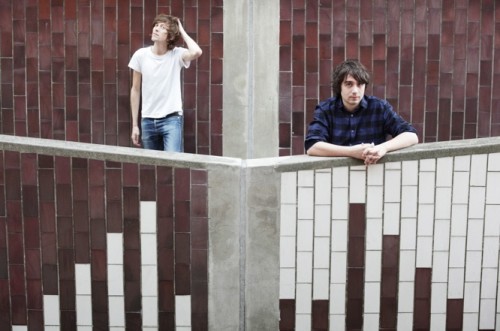 French duo Housse de Racket have many clear influences – Brian Eno, Chic, Justice – but for their first-ever cover, they veered in a less obvious direction. Though the Beach Boys‘ smooth summer sound might not immediately come to mind amidst the band’s drum pads and synths, their version of “Til I Die,” premiering here, keeps all Brian Wilson’s whistful melancholy while adding a glossy electropop sheen. We asked them a little about the cover.

“This song’s always been a mystery to us,” the duo tell us. “The chord progression is a symphony in itself. Brian Wilson at his best! We never recorded a cover before, we started with a hard one…there were maybe an easier song to start with. We tried as hard as possible to do our very own version and not a weak reproduction. Two french guys from the suburb of Paris dreaming of California, landscapes & reverberation. We didn’t even now that the Beach Boys were celebrating their 50th! Heureux hasard.”

Stream “Til I Die” below, exclusively on Cover Me.

There’s also a somewhat surreal video. “This video was shot in North Dakota on our way to Winnipeg, before the Canadian border,” they said. “We were looking for a bridge with lot of traffic, a never ending flow. But when we found the bridge there wasn’t the traffic we expected. So we decided to walk in the middle of the highway. A sunny no man’s land. The mood was perfect with the song.”