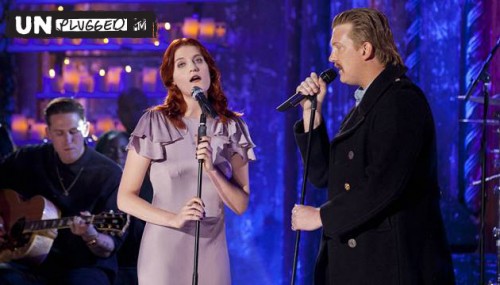 Florence Welch of Florence + the Machine has established herself as something of a covers aficionado, taking on a diverse roster of artists from Drake to Buddy Holly. She debuted her latest cover while taping her upcoming episode of MTV’s Unplugged, which will air on April 8. Following in the footsteps of her excellent collaboration with Billy Bragg on “Fairytale of New York,” Florence teamed up with Queens of the Stone Age frontman Josh Homme for a cover of Johnny Cash and June Carter’s classic duet, “Jackson.”

Johnny and June’s original track hinges on their tumultuous relationship, which gives the song its driving acrimonious energy. Welch and Homme don’t have such a dramatic history, so their cover shines on the strength of their vocals. Florence is the star of the show, floating her lines gracefully above the rest of the track while Homme keeps his contributions understated. Welch’s band members provide an appropriately bluegrass-tinged backdrop for the duet.

Check out more from Florence + the Machine at their website or Myspace.