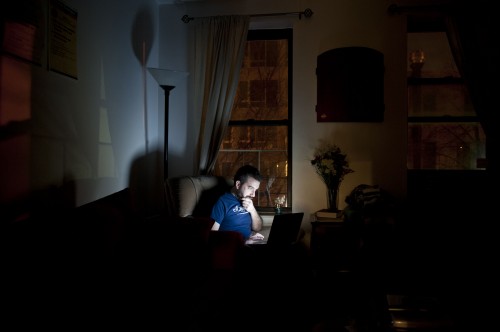 Michael Pomranz, who records with a rotating cast as World Blanket, based his upcoming record 2012 on the writings of psychedelic drug guru Terence McKenna. It comes as no surprise, then, that the man is a Syd Barrett fan. (Fun fact: he’s also the Tosh.0 writer who first discovered Rebecca Black’s “Friday” – but try not to hold that against him).

Pomranz wrote a song years ago calls “Syd Barrett’s Soul” and now he pays more direct homage with a trippy cover of “Let’s Split.” Barrett himself never finished the song – the only recording has him stop in the middle, shuffle some papers, and then continue – so Pomranz took the template and fleshed it out with violin, acoustic strumming, and, just when you’re settling into a Burrito Brothers swoon, shrieking guitar.

Pomranz calls the song “one of the purest examples of capturing an artist’s decent into madness on tape” and notes that he’s not trying to “finish” anything, but rather collaborate with Syd’s ghost. In a lengthy introduction, he offers unusually rich insight into how the song came to him, so we’ve included the whole introduction below the stream.

Pomranz’s Note:
“I’ve always been inspired to cover “Let’s Split” not just because the song is one of my favorite Syd Barrett tunes, but also because it’s completely unfinished. It’s a single-take demo where he literally stops in the middle of the song, says, “Oh no,” and then fumbles papers before finding his place and forging on. And yet the song isn’t just a novelty. Sure it’s one of the purest examples of capturing an artist’s decent into madness on tape, but it’s also a catchy little tune, nervous whistling, paper shuffling and all. What makes it so engaging is that listening to it begs the question: what would this song have sounded like if he had finished it?

“Not to say that in covering the song I’m trying to “finish” Syd’s work. But instead of trying to rework a song that has already been fully realized, it’s fun to work strictly from the artist’s initial inspiration — his raw, unfinished demo. It’s almost as if Syd came to me and said, “Here. I have this little nugget. I’m not going to use it. Take it for a World Blanket song.” It’s completely different than “covering” a song or “completing” an unfinished song: it’s almost as near to a “collaboration” as I could ever get with Syd Barrett — using Syd’s inspiration as a point of departure for my own take on his song.

“In recording this cover, I had a short window of opportunity to finish it before World Blanket’s new album 2012 was to be released. I had been really struggling with what I wanted to do with it, how to tackle it. I had barely touched it before heading out on a five day trip. The trip turned out to be a lot of fun — in a bender sort of way. When I returned, I felt like I was descending into a madness of my own. And with only a handful of days left to get the song recorded. But that fueled me even further. I decided I wasn’t going to “go Syd on this one” — I was going to make him proud and get the job done. I picked up the guitar and laid down the first track and off I was. My good friend Andrew Bulbrook, violinist for The Calder Quartet, happened to be crashing at my apartment. The quartet plays on the new album, so it was a perfect coincidence that he was here to lay down the violin tracks. Four days later the song was done. I’d persevered. Despite my own taste for overindulgences, I’d like to think Waters and Gilmour would have kept me around. Let me please point out that that is a joke.

“But artistically, I’ve always felt connected to Syd Barrett because of our songwriting styles. So many artists try to sound like other artist, or cement a certain style, or completely immerse themselves in a genre or trend or circle or whatever. Syd really had no convention for songwriting: his style feels entirely authentic and true to who he was. In some ways, his songs are not quite right, just like he was. Oddly enough, his is a heady style that somehow comes from the heart. I’ve always felt my music was similar in that way: an intellectual approach to songwriting that somehow is still entirely invested emotionally. I think that’s a rare combination: an organic unity between powerful mind and powerful heart.

“In my 20s I wrote a song called “Syd Barrett’s Soul.” The first line was “Syd Barrett’s soul rests on my mind.” It does rest on my mind, because, in a lot of ways, I wonder about my own soul too.”