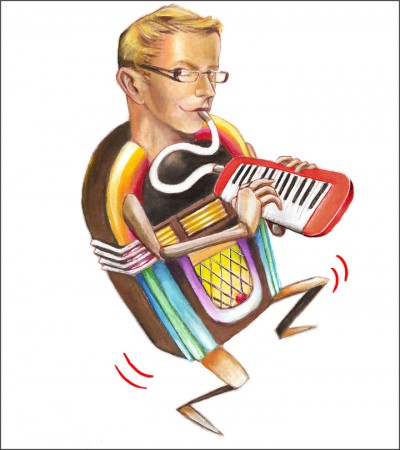 The Axis of Awesome bill themselves as “Australia’s Most Awesomest Musical Comedy Sensation.” With their 2011 viral video hit “4 Chords” nearing four million views, they are certainly trying to earn that title. The trio features Benny Davis on keyboard and vocals; Benny was an original member of the Aussie sketch comedy troupe “The Delusionists” and is a virtuoso on keyboard. He has taken on a side-project featuring his uncanny skill-set as The Human Jukebox.

His debut video and track “90’s Megamix” features Benny the Jukebox performing pop hits from the ’90s on the “blow organ” or melodica. He manages to seamlessly cram thirty plus tracks in a six minute medley. As the tracks aren’t listed, it was quite fun turning off the overlay that tells the info on the  track and guessing. I have a few listed, but I will leave the rest for you to guess and tell us. Below, watch the ’90s pop tribute by the Human Jukebox, as well as the hit video for “4 Chords.”

The Axis of Awesome: 4 Chords

Get more info on the Human Jukebox and The Axis of Awesome at their website.