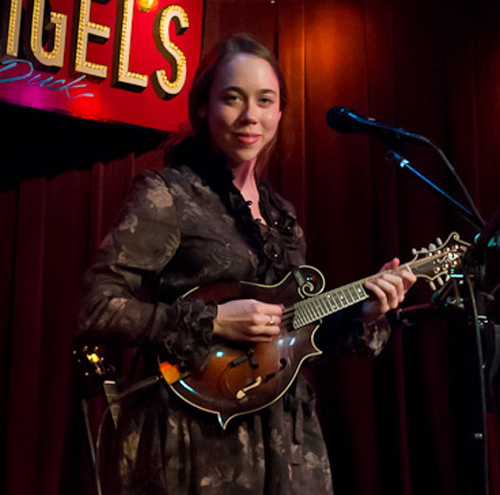 Coming off her well received 2011 album Follow Me Down, Sarah Jarosz is squeezing in a mini-tour before returning  to Boston to complete the 2nd half of her junior year at New England Conservatory. During her stop at McGonigel’s Mucky Duck in Houston, TX, the new face of Americana picked and strummed a handful of fantastic covers throughout her set.

Featuring Nathaniel Smith on cello and Alex Hargreaves on violin, the twenty year old Jarosz switches between mandolin, banjo and guitar with the proficiency of an old time bluegrass vet. The first cover of the evening has the dining audience giggling when she sings “I killed my dinner with karate” from Joanna Newsom’s “The Book of Right On.” The Simon & Garfunkel track “Kathy’s Song” brings out the solo balladeer in Jarosz.

A personal favorite song of mine by Bob Dylan, “Simple Twist of Fate” is a duo with Jarosz singing along with the bass, an incredible performance that embodies the spirit of the song. “The Way You Look Tonight” is a swing tune penned in the mid ’30s and  you wouldn’t know it was seventy plus years later with this time travel performance, spotlighting Sarah’s soulful voice.

Towards the end of the show a high energy neo-country take on The Beatles’ “Drive My Car” gets the crowd going. As the encore starts, about ten notes into the song you can hear an audience member say “Yeah! Tom!”, which in turn gets the crowd singing along to the Tom Waits’ song “Come On Up To The House.”  Some deft mandolin playing and trading of licks wraps up an amazing evening of live music. Enjoy and download the tracks below!

You can get more info on Sarah Jarosz on her website.