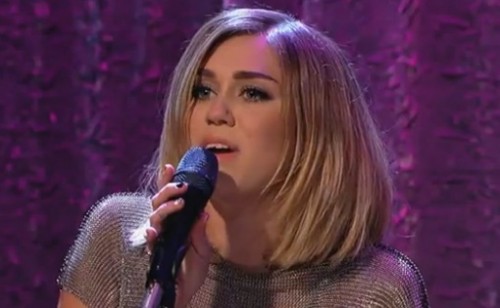 It wasn’t too long ago that a picture of Miley Cyrus posing with a naughty-bits cake was circulating around the Internet. The former Disney star, who is more well known for her less-than-Disney-values than her singing ability, steps up her vocal game with a cover of Bob Dylan‘s “You’re Gonna Make Me Lonesome When You Go.”

The untamable singer performed the cover on Jimmy Kimmel to promote Chimes Of Freedom: Songs Of Bob Dylan Honoring 50 Years of Amnesty International. Her performance proved that she isn’t just the child of a one-hit wonder – this girl’s got chops. It isn’t too difficult to mess up a coffee house rendition of a Dylan song, but we have to give credit where credit’s due. Check out the video below and let us know if you think this change in Cyrus’ style is for the better:

If you liked this, be sure to pop over to her official website.