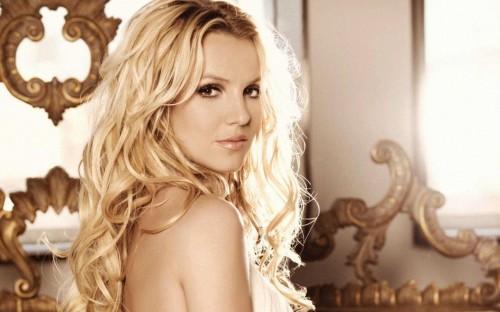 They do say it’s my birthday. To which my go-to retort is, “Yep, me and Britney Spears.” Though the Princess of Pop Insanity owned December 2 since before I was born (girlfriend is turning The Big 3-0 today, while I’m not quite there yet…), our shared special day has cast its shadow on mine since she pranced down the “Hit Me Baby One More Time” high school hallway in those pigtail braids a dozen years ago.

For most of those years, Britney and her terrifying slate-like abs have been the antithesis to everything I hold dear. She’s stood for a nauseatingly shallow sexuality, her sense of self has twisted endlessly, disturbingly, head-shavingly in the wind…and, on top of all that, her songs were boring.

I once delivered a presentation in twelfth grade Music Theory class on the compositional structure of “Oops, I Did It Again.” The fire alarm went off halfway through. It was a relief for all concerned. And yet the girls at my figure skating lessons enthusiastically mimicked B’s dance moves as they glided along the ice. They sported necklaces spelling out her name. My eyes goggled, the volume on my Discman (playing Miles Davis’ Kind of Blue) jacked up, and I wondered what I was missing.

So you see, for all these years, she’s acted as both my albatross and my cheap joke. “Yep, me and Britney Spears.” Because a birthday is definitely the only thing I’d want to share with her. But now here we are, staring down the barrel of our thirties together. Both equipped with life experience, slowing metabolisms, and, perhaps, a smidge of maturity… which is what I attribute to my newfound LURVE for the music of BS. Dear B. Other B. The B whose art, I’m beginning to hear (despite the slight tinnitus gained at a Rolling Stones concert in 2003), has begun to do that heart-grabby dance move on my very soul.

I’m now proudly wise enough to appreciate the fun, funky, grind-it-down tunes my B-Day buddy has been steadily serving up for over a decade, despite all the poor business decisions (Crossroads, anyone?), bad haircuts, and associations with various fellows crazying up her personal life. I mean, time for me to get over the drama, if Madonna hopped on the Britney train eight years ago.

So today, please join me in celebrating the unsinkable BS with these covers from bands who were also able to zero in on the exciting musical potential yet left to be mined from her impressive, against-the-odds, still rocking career. Happy Birthday, Britney!

From his album, Sad Britney, Dallman brings us this acoustic guitar and trombone-filled take on Britney’s debut. Spears’ earliest hits haven’t been covered nearly as prolifically—or professionally—as her singles since the era of YouTube covers hit its stride. This version inspires visions of arid, tumbleweed-strewn dirt roads, sunrises and cigarette ashes. The muted trombone harmonies deliciously blur as the tune’s yearning Damien Rice-like vocal tone and thoughtful arrangement combine to make this an outstanding cover of a song whose giggly schoolgirl reputation deserves to be redeemed.

We featured this amazing indie revamp on Britney’s oft-covered hit last year in our piece on The Ten Best Britney Cover’s You’ve (Probably) Never Heard. Back then we told you this “mockney English cut by a North African-born French pop star who looks like Mika and sounds like the lovechild of Prince and Sade Adu” was worth a listen. Despite the avalanche of Spears covers since then, this smooth, sexy, and (a tiny bit) silly one still stands its ground.

Californian post-punk screamo crew A Static Lullaby find the low-simmering ire in this normally seductive track and bring it to a full boil. A boil that results in an exploded kitchen. But their rawness and animality — and sparing but deft touch of autotune — translate “Toxic”s sentiment surprisingly well. It’s a standout from the swath of simple Britney-goes-punk covers out there sloppily adding power chords and a wall of nutsy machine gun drums without giving much thought to the ‘why.’ Kudos to A Static Lullaby for ripping the venom-filled heart out of this one and respectfully putting it on musical display.

Corin Joel – Hold It Against Me (Britney Spears cover)

Also previously featured in a Britney-flavoured piece here on Cover Me, Corin Joel’s bare, whispery, hypnotic take is definitely worth revisiting. Its extended musical outro progressively builds with tinkling bells, luscious strings, and a glimpse of champagne reverie. The result: Musical equivalent of the idealistic but scorned lovechild of Britney Spears and Elliott Smith? Perhaps. A slowly addictive tune that pairs well with a glass of wine and an old photo album? Definitely.

True, this version rocks a bit on the “bro”-ish side. But if you can accept a serious injection of testosterone into this recent dance floor standard (and if you can shield your eyes from the awkward dance moves in the video), this Swedish band’s hip shakeup of the normally driving “’Til The World Ends’” groove is worth the download. Fat, funk-inspired bass mixes with sparkly guitar reverb, and several rich layers of frenetic percussion make this more of a move-and-shake than bump-and-grind dance tune.

Check out more Britney Spears covers in the archive.

One Response to “They Say It’s Your Birthday: Britney Spears”