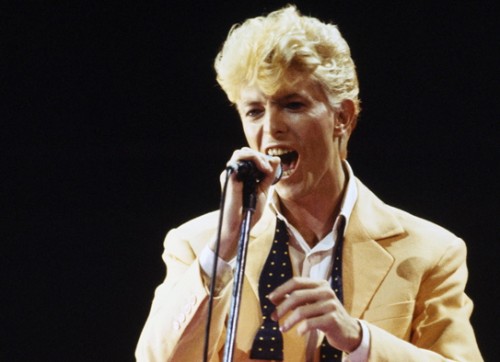 Let’s Dance may suffer when compared to David Bowie’s ’70s catalog (this goes for thousands of other albums as well), but there are artists who have spent their entire careers unable to come up with three songs as good as the three that open the album. “Let’s Dance” was the #1 single, “China Girl” went top ten, but the leadoff track, “Modern Love,” just might be the one that’s captured the most hearts. It’s got energy, singalong lyrics that can’t quite bring themselves to sound mindless, and that “buuuuut IIIII try” hook could land a tiger shark.

It also sounds very, very 1983, and for a song this good to be trapped in its time like Artax in the Swamps of Sadness – well, it just won’t do. So there have been a profusion of artists marrying their vision to Bowie’s, resulting in a wide, wide range of covers ranging from reggae to cabaret. The challenge didn’t lie in finding good covers; it lay in winnowing the list of them down to five. Consider this a sampling of the great versions out there…

This one comes from an album of lounge covers called Vintage Cafe Vol. 3, and within thirty seconds you know exactly how volumes 1 and 2 sound. In limited doses, though, it’s all good, and there’s a warm breeziness here that’s very inviting and not just a little desirable.

An Israeli singer-songwriter, Geva Alon proves that if you have the talent to be huge in Tel Aviv, you can be huge worldwide. His cover adds a resonant note of desperation that Bowie’s version never held, and in all likelihood never could have held.

The Last Town Chorus go heavy on the atmosphere in their interpretation, making you wonder if maybe a lap steel guitar should have always been a part of the instrumentation. They certainly turn down the exuberance of Bowie’s take, making it more suited for walking after midnight than clubbing.

Marie Mazziotti’s cover appears in JCVD, the movie that shows another side of Jean-Claude Van Damme, and it similarly shows another side of Bowie. Not only is the propulsive acoustic guitar the only instrument, but Mazziotti’s unsettlingly rich voice gives the song a curious feel that adds to the excitement. The way she sings “Modern love just walks…” in the second chorus, as though the rug’s being pulled out from under her, gives the song a thrill it never knew it could have.

The Norwegian band Syme thought enough of their cover of “Modern Love” to name an EP after it. You can’t blame them, really – their arrangement goes from keyboards and tentative vocal to a propulsive indiepop that kidnaps any memories of Bowie’s version and leaves you with the impression that this was the way the song was always meant to be.

Like Bowie covers? Ay, we got six pages worth of ’em right here.